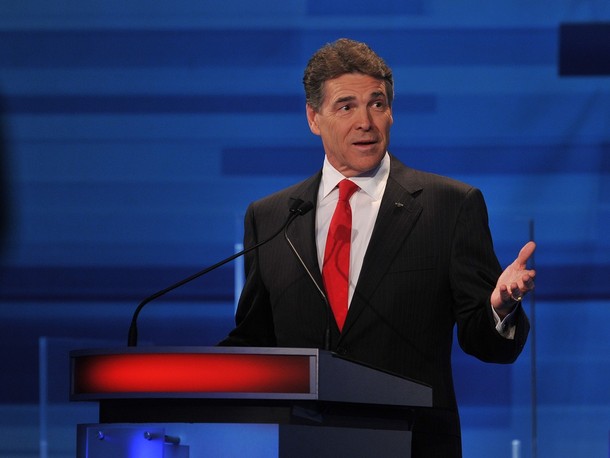 From Joe Parkinson, the Wall Street Journal:  For Turkey, busy riding an economic boom and preoccupied with soccer scandals and revolutionary shifts across its borders, the race for the U.S. Republican nomination hasn’t exactly been a box office draw.  Until Tuesday, that is …

Late Monday, Texas governor and presidential hopeful Rick Perry said that Turkey was governed by “what many perceive to be Islamic terrorists,” and suggested the country should be booted out of NATO.

The governor’s remarks, made during the Fox News Channel and Wall Street Journal GOP debate in South Carolina, came in response to a question from the moderator over whether Turkey still belonged in NATO amid international concern over media reports of declining press freedoms, deteriorating relations with Israel and a rising murder rate of women.

“Obviously when you have a country that is being ruled by what many would perceive to be Islamic terrorists, when you start seeing that type of activity against their own citizens, then … not only is it time for us to have a conversation about whether or not they belong to be in NATO but it’s time for the United States, when we look at their foreign aid, to go to zero with it,” Mr. Perry said.

In Turkey, a long-time ally of Washington and NATO’s only majority-Muslim member, the comments were too late to make the Turkish dailies, but early Tuesday, news websites and Twitter feeds here were abuzz with Turks’ angry and confused reaction. Turkish daily Milliyet ran a banner on its website calling the comments “scandalous.” Hurriyet said the governor’s words were “offensive. . . .”

Turkish and U.S. diplomats say they cannot remember a time when cooperation between Ankara and Washington was closer, citing that President Barack Obama called Turkey’s prime minister more than any other leader except Britain’s prime minister in 2011.

What analysts call an increasing symmetry of Washington and Ankara’s policies has formed after a period of significant strain in 2009-2010, when Turkey moved closer to Iran and tensions with Israel were at boiling point over the killing of seven Turkish nationals by Israeli commandos on the Gaza-bound Mavi Marmara flotilla.

In a crucial shift, Turkey agreed last fall to host a North Atlantic Treaty Organization missile-defense system, which was designed by the U.S. to contain Iran.

From Arlette Saenz, ABC News:  Victoria Coates, foreign policy advisor to Perry, further explained the governor’s remarks, saying that some view the leaders of Turkey as Islamic terrorists due to their support of Hamas and the flotilla against Israel.

“The governor was responding to the questioners references to violence against women and to association with Hamas, I think both of which are things that many people do associate as he said with Islamic terrorists,” Coates told reporters in the spin room. “He was referring to those things, and while he would welcome the opportunity to work with Turkey on regional issues like Syria or Iraq, this kind of behavior on the part of that country is disturbing and I think we should concerned about it.”  (photo: Getty)