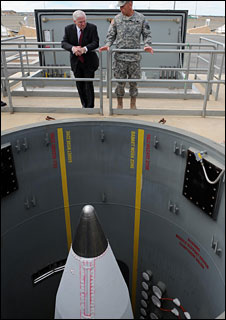 From the BBC: Romania insists the deal will make the region more secure. Bogdan Aurescu, the chief Romanian negotiator in the coming talks with the US on the details of Romanian participation, says it will lead to "increased security for Romania, and more security for the Black Sea region as a whole, not only for Romania and its allies."

Regarding Russian concerns, he says: ‘We also have to focus our efforts and energy to avoid suspicion between us, and to clarify our intentions.

"That’s why a process of transparent consultation and discussion is always needed."

The introduction of the interceptors and radar clearly represents a shift in the balance of power in south-east Europe, following 2008’s Russia-Georgia conflict, and Ukraine’s new president’s offer to extend Russia’s lease on its naval base at Sevastopol in the Crimea.

"The Black Sea region… will be a very interesting hub, in terms of the arms race and everything we can can see developing on the eastern border of Nato," says Radu Tudor, a defence analyst in Bucharest.  (photo: BBC)