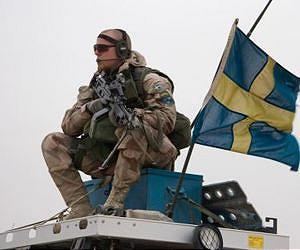 From AFP:  Military experts said Sweden was probably unable to defend itself on its own in the event of an invasion, in a report published Thursday, saying the armed forces lacked necessary resources.

“Can We Defend Ourselves For a Week?” the Royal Swedish Academy of War Sciences asked in the title of its report. . . .

The report echoed comments made by Sweden’s chief of the armed forces, Sverker Goeranson, in the media in early January, when he said the Scandinavian country would be able to hold off an attack for only “about a week” following repeated cuts to the defense budget. . . .

"We think the military does not have a credible ability to defend all of Sweden … In the event of a possible attack against Sweden, we would always need help from abroad," it [the Royal Swedish Academy of War Sciences] wrote.

"We think that the authorities should rapidly carry out a study on the conditions and possibilities of obtaining such assistance so that any potential crisis in the Baltic region can quickly be resolved, thereby avoiding any act of war from being undertaken," it said.  (photo: AFP)