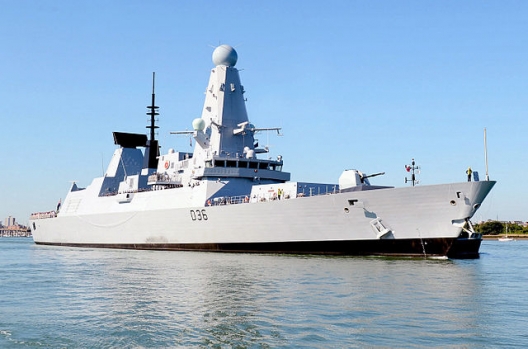 In a calculated test of Britain’s reduced naval capacity in the North Sea, the Russian warship came within 30 miles of the coast.

It was detected nearing Scotland, but the only ship the Royal Navy had available to respond after Ministry of Defence cuts was in Portsmouth, resulting in a delay of 24 hours until it was in position. . . .

RAF reconnaissance aircraft tracked the progress of the Russian warship as it neared north-east Scotland, and the tension heightened when aerial photographs revealed the ship was carrying a full payload of guided missiles.

Commanders at PJHQ decided to send the new Type 45 destroyer HMS Defender, which is Britain’s immediate-response ship during a national security crisis.

The Russian ship waited in the Moray Forth, a stretch of water that flows into Loch Ness, for Defender to arrive, as if her captain were recording the Navy’s response times. . . .

A defence source said: ‘This was no exercise – the Russian ship was behaving very aggressively in a stretch of water bordering Britain’s territorial waters.

‘They were watched very closely by the RAF and it was agreed that HMS Defender should block the Russians’ passage. . . .

A tense stand-off ensued when Defender reached the Moray Firth. While the MoD last night declined to explain the specific international protocols adhered to at such a delicate moment, The Mail on Sunday understands the crews exchanged radio messages in an attempt to establish each other’s intentions.

No shots were fired but Defender’s 190-strong crew remained at battle stations throughout the confrontation.

The British crew then watched as the Russian ship retreated. They followed it north to the Baltic Sea, where a Russian task force was on legitimate manoeuvres. Defender then sailed back to Scotland, docking in Glasgow on Friday.