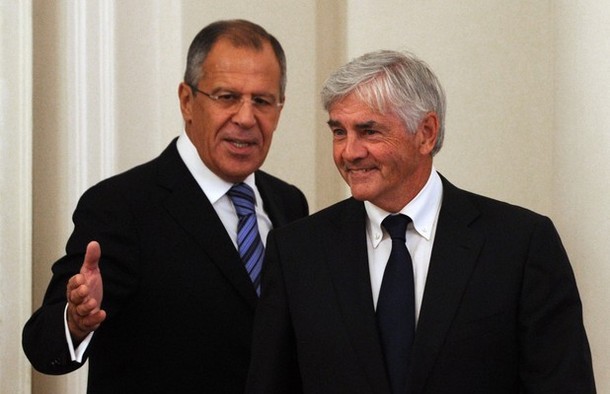 From Nataliya Vasilyeva, the AP:  The foreign ministers of Russia and Canada both said Thursday they expect the United Nations to rule in favor of their nations’ respective rival claims to Arctic resources.

Russia, the U.S., Canada, Denmark and Norway have all been trying to assert jurisdiction over parts of the Arctic, which is believed to contain as much as a quarter of the Earth’s undiscovered oil and gas.

Canada’s Lawrence Cannon and Russia’s Sergey Lavrov said after talks here Thursday that both nations claim the Lomonosov Ridge under the Arctic as an extension of their respective continental shelves.

An Arctic strategy paper signed by Russian President Dmitry Medvedev in 2008 said that by 2011 Russia must complete geological studies to prove its claim to Arctic resources and win international recognition of its Arctic borders. The document said that the polar region must become Russia’s "top strategic resource base" by the year 2020. …

Russia’s Lavrov, meanwhile, warned against NATO boosting its presence in the Arctic. "I don’t think it would be right for NATO to assume the right to determine … how make decisions in the Arctic," he said.

Cannon said that while Canada is not looking to militarize the Arctic dispute, it intends to "assert sovereignty" over some parts of the Arctic to ensure the security of its borders.  (photo: Getty)