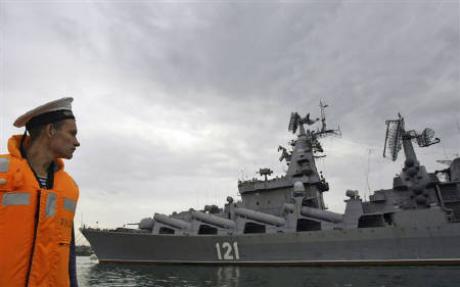 From Dmitry Solovyov, Reuters:  Russia plans to radically renovate its crumbling Black Sea Fleet with 15 new vessels after a landmark deal with Ukraine to extend the lease on the fleet’s main base, a Russian military think tank said in a report.

In a step that underlined Ukraine’s shift back towards Moscow after the election of President Viktor Yanukovich, Kiev agreed in April to extend the Russian fleet’s Sevastopol base lease by 25 years in return for a 30 percent cut in gas prices.

Much of the fleet has fallen into disrepair in recent years, but Russia aims to overhaul it with 10 modern frigates and five diesel-electric submarines by 2020, the Centre for Analysis of Strategies and Technologies (CAST) said in a report.

"The implementation of these decisions will be significantly facilitated by Russia’s military partnership with Ukraine which is being restored following Viktor Yanukovich’s election as Ukrainian president," said the report obtained by Reuters. …

"The events of August 2008 — a military campaign against Georgia and the voyage of U.S. warships to the Black Sea in a bid to offer at least moral support to Georgia — have avidly shown that the Black Sea and Baltic fleets remain key for the security of the Russian state," CAST wrote.

While the Black Sea fleet may still be a menace to Georgia, it is no longer a match for NATO member Turkey, the region’s main naval power.  (photo: Reuters)