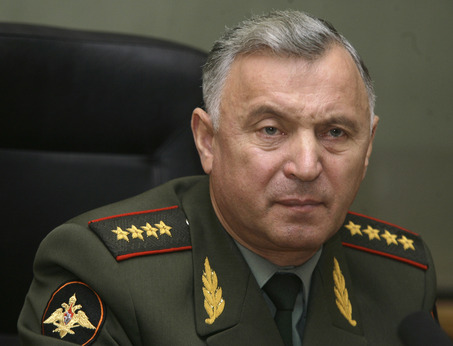 From the AP:  Russia’s top military officer has threatened to carry out a pre-emptive strike on U.S.-led NATO missile defense facilities in Eastern Europe if Washington goes ahead with its controversial plan to build a missile shield.

President Dmitry Medvedev said last year that Russia will retaliate militarily if it does not reach an agreement with the United States and NATO on the missile defense system.

Chief of General Staff Nikolai Makarov went even further Thursday. “A decision to use destructive force pre-emptively will be taken if the situation worsens,” he said at an international conference attended by senior U.S. and NATO officials.

Russian Defense Minister Anatoly Serdyukov also warned on Thursday that talks between Moscow and Washington on the topic are “close to a dead end. . . .”

Makarov’s statement on Thursday doesn’t seem to imply an immediate threat, but aims to put extra pressure on Washington to agree to Russia’s demands. . . .

“We can’t just reject the distrust that has been around for decades and become totally different people,” Russian Deputy Defense Minister Anatoly Antonov said in addressing U.S. and NATO officials. “Why are they calling on me, on my Russian colleagues, to reject distrust? Better look at yourselves in the mirror.”

At a later news conference, Tauscher played down Makarov’s comments on pre-emptive measures.

“We’ve heard it before,” she said. “We think that’s off on the horizon.We think they were showing us what could happen. I think we’re far from there, but we’re aware of what they’re saying.”  (photo: AP)