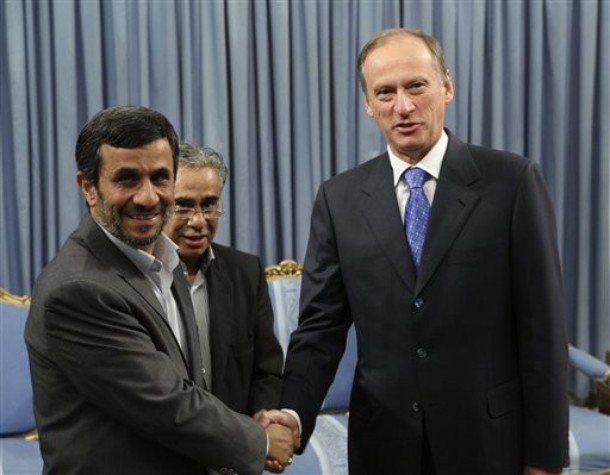 From Henry Meyer and Ilya Arkhipov, Bloomberg:  Russia received information that members of the North Atlantic Treaty Organization and some Persian Gulf countries are preparing military intervention in Syria, the head of the Russian Security Council said.

Turkey, a NATO member, may play a key role, Nikolai Patrushev, who used to head the country’s intelligence agency, the Federal Security Service, told Interfax in comments confirmed by his office. The U.S. and Turkey are working on a possible no-fly zone to protect Syrian rebels, Patrushev said.

“We are receiving information that NATO members and some Persian Gulf states, working under the ‘Libyan scenario’, intend to move from indirect intervention in Syria to direct military intervention,” the Russian security chief said. . . .

“This time, it won’t be France, the U.K. and Italy that will provide the main strike forces, but perhaps neighboring Turkey, which was until recently on good terms with Syria and is a rival of Iran with immense ambitions,” Patrushev said. . . .

Russia, which has a naval base in Syria and sells weapons to the Middle Eastern country, is more concerned that Islamic radicals may come to power, said Irina Zvyagelskaya, a Middle East analyst at the Academy of Sciences in Moscow. . . .

While Russia would block any effort to seek UN approval for a no-fly zone in Syria thanks to its veto-wielding power as a permanent member of the Security Council, Western nations and their allies may form a coalition like they did for the U.S.-led invasion of Iraq in 2003, said the analyst.

“There are scenarios which different countries are looking at,” Zvyagelskaya said. “We have seen before what a no-fly zone means, it will be used to overthrow the regime.”

Defectors from Assad’s army who have set up an opposition force called the Free Syrian Army called at the end of last year for a no-fly zone and two buffer areas with international backing as they seek to topple the Syrian government.

The group wants a buffer zone in the north, on the Turkish- Syrian border, and another in the south near the border with Jordan to help them bring the fight closer to Assad, Riad al As’ad, a former Syrian colonel who leads the Free Syrian Army, said in a phone interview from Turkey on Nov. 18.  (photo: AP)