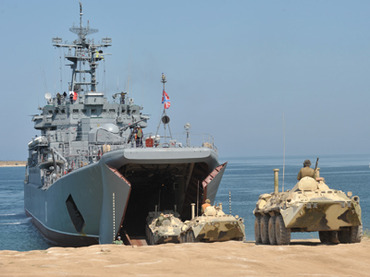 From Andrew E. Kramer, Reuters:  Russia, which seems intent on positioning itself as an increasingly decisive broker in the Syrian crisis, announced on Tuesday that a flotilla of navy vessels had sailed to the Mediterranean Sea and some would dock in the Syrian port of Tartus. The naval group includes several landing craft with marines.

The voyage and naval maneuvers seemed designed to convey a message that Russian leaders would protect their interests in Syria, Russia’s most important relationship in the Middle East, even as they restrict new shipments of weapons to President Bashar al-Assad’s government until the conflict subsides, as military export officials had announced on Monday. . . .

Russian military officials have repeatedly hinted at a possible role in Syria for their naval power, diminished but still floating two decades after the Soviet collapse. The ships have been presented as a means either to evacuate Russian citizens or to secure the naval fueling station at Tartus, on the Syrian coast.

Though little more than a floating pier and small barracks, the site is Russia’s only remaining foreign military base outside the former Soviet Union. Any Russian presence on the coast would serve as a tripwire to prevent Western military intervention.

The statement by the Defense Ministry said ships had steamed from ports of the Northern and Black Sea fleets.

They would meet for training exercises in the Mediterranean and Black seas, it said. Taking part, the statement said, would be two Black Sea fleet landing craft that can carry marines, the Nikolai Filchenkov and Tsezar Kunikov.

Russia’s Interfax news agency cited an unnamed military source as saying an escort ship, the Smetlivy, would stop in Tartus, in Syria, for resupplying in three days — though it had presumably just recently left its home port of Sevastopol, in the Black Sea.

The other contingent, sailing from the Arctic Ocean base of Severomorsk, situated in the Murmansk Fjord, will take longer to arrive. That convoy includes three landing craft with marines escorted by an anti-submarine ship, the Admiral Chabanenko, Interfax reported, citing an anonymous military official.

The voyage to the Mediterranean was unrelated to the Syrian conflict, the official said, but the boats laden with marines would stop in Tartus to “stock up on fuel water and food.  (photo: RIA Novosti/Sergey Pyatakov)