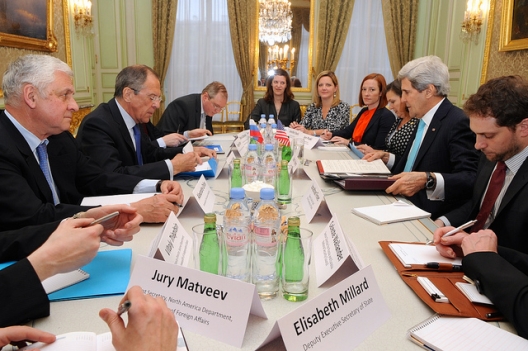 It’s worth asking whether Mr. Putin would have launched his latest provocation if the United States had continued to raise the pressure on the Russian economy in the weeks since the last measures were unveiled on March 20.

It’s not too late to prevent Russia from destroying Ukraine, but this time the West must act quickly. A presidential election scheduled for May 25 is vital to stabilizing the country, by creating a new government with a clear mandate. Predictably, Russia has been demanding that the election be called off. The provocations in eastern Ukraine, if they do not presage an invasion by the Russian troops still massed on the border, are likely the beginning of an effort to disrupt the vote and make the country ungovernable. . . .

The next step is to apply meaningful new sanctions, not just against individual Russians but also against sectors of the economy. Mr. Kerry noted Tuesday that Mr. Obama has already approved such actions, adding that “energy, banking, mining — they’re all on the table.” But Mr. Kerry also spoke optimistically about a “four-party” meeting Russia had agreed to attend next week with the United States, Ukraine and the European Union. There’s nothing wrong with more talks, if the Ukrainians are at the table. But the chances they will lead to a genuine de-escalation of the crisis will be greater if, in the meantime, Russia is subjected to significant economic punishment.