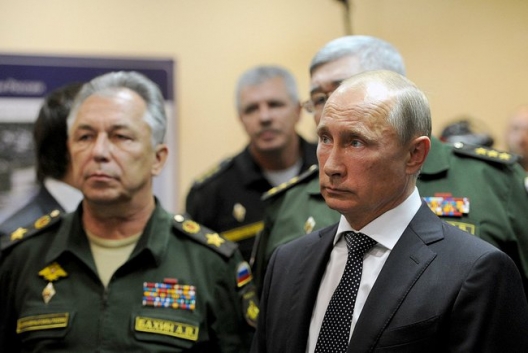 In European capitals I have visited recently – in particular, Warsaw and Berlin – certain ideas about the Ukraine crisis are regarded as established facts. The annexation of Crimea was an illegal act of aggression. There has been direct Russian military intervention in Ukraine. Indeed, the German government thinks that between 500 and 3,000 regular Russian troops have been killed in the fighting in eastern Ukraine.

But in Mr [chairman of the Russian parliament’s education committee Vyacheslav] Nikonov’s world the crisis in Ukraine is the product of American aggression. There are indeed foreign troops and military advisers in Ukraine – but they are Americans, not Russians. These are common themes on Russian television.

The nationalist discourse in the Russian media is the cause of great alarm in the Baltic states and in Poland. However, there is one point where Russian and Polish analysis of the crisis meets. Officials and commentators on both sides of the looking glass agree that there is a real danger of the Ukrainian conflict morphing into a wider war between Russia and the west.

“This is the most dangerous moment in relations between Russia and the west since the Cuba missile crisis,” Mr Nikonov argues. Dmitri Trenin, a less strident analyst who runs the Carnegie Moscow Center, also evokes the nuclear stand-off of 1962. Mr Trenin spells out a possible ladder of escalation in which western military support for Ukraine enrages Russia. In response, Russia might then mount a full invasion of Ukraine and even go nuclear – or, at least, use a nuclear-capable missile with a conventional warhead. . . .

Funnily enough, I had had the same scenario spelt out for me by a senior Polish official in Warsaw a couple of weeks earlier. The Poles worry that, having swallowed Crimea, Mr Putin will now be tempted to grab a larger part of Ukraine – perhaps the southern chunk of the country that the Russians have taken to referring to as “Novorossiya. . . .”

“Putin has worked the west out,” says one gloomy Polish official. “He knows we won’t use force.” The darkest Polish scenario is also that Mr Putin might be tempted to go up to the nuclear brink by using conventionally armed missiles that could carry nuclear warheads. The dangers of such a policy hardly need spelling out. But destroying the credibility of Nato’s security guarantee to the Balts – and therefore of Nato itself – would be a tremendous prize for Russia.