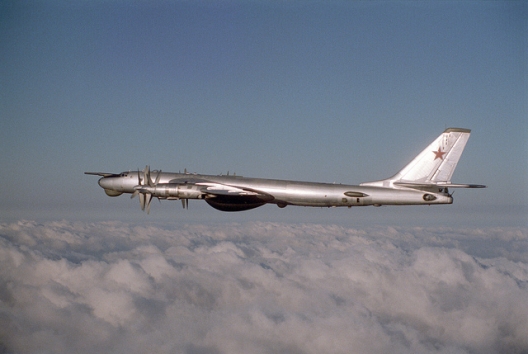 The Russian Tu-95 Bear bombers were tracked flying a route across the northern Atlantic near Iceland, Greenland, and Canada’s northeast.

Disclosure of the nuclear bombing practice comes as a Russian general last week called for Moscow to change its doctrine to include preemptive nuclear strikes on the United States and NATO.

Gen. Yuri Yakubov, a senior Defense Ministry official, was quoted by the state-run Interfax news agency as saying that Russia’s 2010 military doctrine should be revised to identify the United States and the NATO alliance as enemies, and clearly outline the conditions for a preemptive nuclear strike against them.

Yakubov said among other needed doctrinal changes, “it is necessary to hash out the conditions under which Russia could carry out a preemptive strike with the Russian Strategic Rocket Forces”—Moscow’s nuclear forces. . . .

No U.S. or Canadian fighter jets were scrambled to intercept the Bear-H bombers since the aircraft stayed outside the North American Air Defense Identification Zone. . . .

However, officials said it took place during the NATO summit in Wales that was held Thursday and Friday. . . .

Northern Command has confirmed that Russian strategic bomber flights increased sharply over the past six months.

Last month, at least 16 bomber incursions by the Russians took place within the northwestern U.S. and Canadian air defense zones over a period 10 days. It was the largest number of incursions since the end of the Cold War. U.S. fighter jets intercepted the Russian aircraft and followed them until they exited the defense zone.

In June, Russian bombers flew over the arctic prompting intercepts by Canadian fighters on two occasions. The Canadian government called the stepped up bomber flights a “strategic message” from Moscow amid heightened tensions.