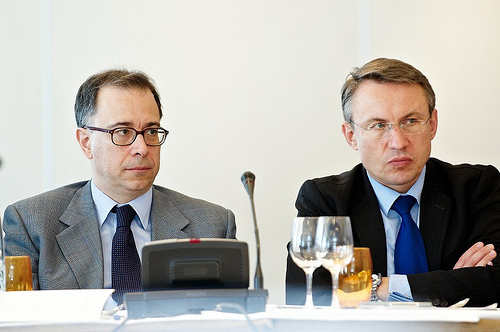 From ITAR-TASS:   "The missile defence system in Europe remains a stumbling block in our relations with the alliance. Finding mutually acceptable solutions to this problem is still possible, although the window of opportunity has been shrinking steadily. We have offered NATO a variety of formulas for joint action in this area, but until now we have not seen willingness of partners to consider our concerns," he [Russia’s Acting Permanent Representative at NATO Nicholas Korchunov] said.

It is difficult to expect a solution to the missile defence after the presidential election in the U.S., even if Barack Obama is re-elected, Korchunov believes. "The U.S. has been moving for years towards creation of its own missile defence system. Today, we do not see any factors that could cause them abandon their approaches,” he said. “The situation could be changed radically only if the United States agreed with our proposal: to have Russia and the United States and Europe equal participants in this process. Then, we would create together a missile defence system, would have an opportunity to analyse threats together, and can manage jointly the system, make decisions on its use."

"If we follow this route, we shall have a unique opportunity to open a brand new page in relations with the United States and NATO, to put into practice, not in words, the principle of indivisibility of security. We are ready to continue the dialogue and to search for acceptable solutions on this basis. However, as the U.S. plans for missile defence are embodied "in iron", the time to find a compromise is less and less," he said.  (photo: Security and Defense Agenda)    (via @Kostian_V)