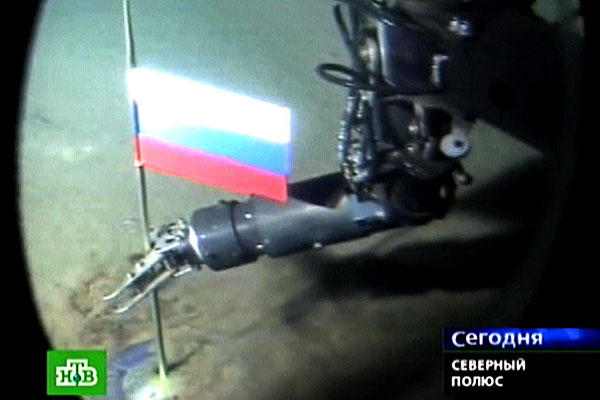 From Fred Weir, the Christian Science Monitor:  Russia is expected within months to claim to the United Nations its right to annex about 380,000 square miles of the Arctic. . . .

Within the next year, the Kremlin is expected to make its claim to the United Nations in a bold move to annex about 380,000 square miles of the internationally owned Arctic to Russian control. At stake is an estimated one-quarter of all the world’s untapped hydrocarbon reserves, abundant fisheries, and a freshly opened route that will cut nearly a third off the shipping time from Asia to Europe.

The global Arctic scramble kicked off in 2007 when Russian explorer Artur Chilingarov planted his country’s flag beneath the North Pole. "The Arctic is Russian," he said. "Now we must prove the North Pole is an extension of the Russian landmass."

In July, the Russian ship Akademik Fyodorov set off, accompanied by the giant nuclear-powered icebreaker, to complete undersea mapping to show that the Siberian continental shelf connects to underwater Arctic ridges, making Russia eligible to stake a claim. Around the same time, Defense Minister Anatoly Serdyukov announced the creation of an Arctic military force tasked with backing up Moscow’s bid.

"We are open for a dialogue with our foreign partners and with all our neighbors in the Arctic region, but of course we will defend our own geopolitical interests firmly and consistently," Prime Minister Vladimir Putin said in July. Among other things, Moscow plans to build at least six more icebreakers and spend $33 billion to construct a year-round port on the Arctic shores.  (photo: NTV/AFP)