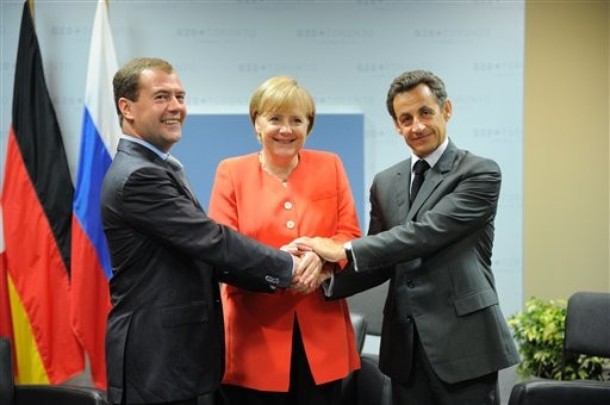 From Steven Erlanger and Katrin Bennhold, the New York Times:  President Nicolas Sarkozy of France plans to propose a new security and economic relationship between Europe and Russia when he meets with President Dmitri A. Medvedev of Russia and Chancellor Angela Merkel of Germany this month in Deauville, senior French officials said Friday.

The idea is to have a single zone of security and economic cooperation, the officials said, that will pull Russia closer to Europe but apart from the North Atlantic Treaty Organization. The alliance itself is holding a key meeting in November intended to approve a new strategic doctrine, and American officials are unhappy with the idea of France and Germany talking to Russia — without the United States present — about security in advance of the talks.

“Since when, I wonder, is European security no longer an issue of American concern, but something for Europe and Russia to resolve?” asked a senior American official, who spoke on condition of anonymity. “After being at the center of European security for 70 years, it’s strange to hear that it is no longer a matter of U.S. concern.”

Still, NATO’s relevance is in question as it struggles to hold together in the fight against the Taliban in Afghanistan, and Russia seems to many to be a natural part of Europe and an important, if difficult, ally on issues like Iran and global terrorism. …

Mr. Sarkozy has argued in the past that Russia is now a partner of the West, not a threat to it, and must be treated as such. For those reasons he has defended the sale to Russia of French Mistral ships, which can carry tanks and helicopters, despite concerns from Georgia and the Baltic nations that Russia could use them to expand its zone of influence.

The Mistral is only one part of a much broader charm offensive with Russia by France, intended to win more business from its oil- and gas-rich neighbor to the east.