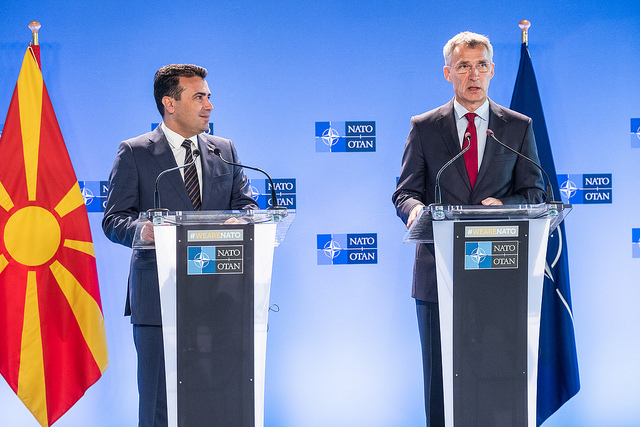 Excerpts from Joint press point with Secretary General Jens Stoltenberg and the Prime Minister of the former Yugoslav Republic of Macedonia Zoran Zaev.

At our Summit in two weeks, I expect that Allied Heads of State and Government will invite you to start accession talks.

And once all national procedures have been completed to finalise the agreement, you will join NATO.

Without the finalisation of the agreement, your country can not join NATO in the foreseeable future. So this is an historic opportunity which cannot be missed.

NATO’s door is open, and you are now on the doorstep. You have already shown your commitment to international peace and security, working with NATO. For example with your contributions to our presence in Afghanistan. And you are contributing to continuing stability in the Western Balkans.

NATO shares that commitment to security and stability in the region. It is important not just for the Western Balkans, but for the whole of Europe….

QUESTION (Tanya – Macedonian Press Agency): [Interpreted}: [inaudible] … to the process exactly. So what is going to happen at this Summit first? What is that invitation? What are the accession talks? What do they consist in and how long do they last? On the Summit, are you going to wave the flag? Is it going to be installed? Is the Macedonian flag going to be installed on that day? And, once the procedures are over and the referendum is passed, when can Macedonia expect to become a full member. And to the Prime Minister, on internal reforms, this is a criticism that has been repeated many times since Tuesday. Have you heard these criticisms and what is your reply to them? Second question I would like to ask is: do you know whether President Tusk or the European Union are asking Macedonia to open refugee camps in Macedonia?

JENS STOLTENBERG [NATO Secretary General]: What we will do, and I am confident that the Heads of State and Government will do that when they meet in July, is to invite the former Yugoslav Republic of Macedonia to start accession talks. Then we will have accession talks for normally some months and given that the internal processes are finalised in the country, then you can join NATO. Meaning that, after we have finalised the accession talks, we will then sign an Accession Protocol and then this Accession Protocol has to be ratified in the different parliaments of the NATO Member States, 29 Member States. It varies a bit how long this takes, but I can give you two examples: when Montenegro joined, we invited Montenegro to start accession talks in December 2015, then we completed the accession talks in March 2016, so meaning 3 months, and then all 29 Allies had ratified by June 2017. So actually the thing that takes some time is the ratification in the different Member States. When Albania and Croatia joined, they were invited in April 2008 at the Bucharest Summit, and they joined in April 2009, one year later, so that was even faster. So we speak about something between one and one and a half years from when we invite to start accession talks until the country can be a full member. But as soon as we have signed the Accession Protocol, which normally takes just a few months – Montenegro 3 months – then the country will be invited to participate in all NATO meetings and will sit around the table and be a part of the NATO Council. So actually Montenegro started to participate in all NATO activities in March 2016, only three months after we started the accession talks. So this can go quite quickly; we speak about months. As soon as the former Yugoslav Republic of Macedonia has finalised the Agreement, meaning made the necessary changes in the Constitution, and then we can invite the country to join under its new name, the Republic of North Macedonia. So I really hope that the people of your country seize this opportunity; it’s an historic opportunity, and if this opportunity is turned down, then it’s very hard to imagine how we can once again come to a situation where you are so close to joining NATO. So it’s for the people of the former Yugoslav Republic of Macedonia to decide, but we are ready to invite and to do it as quickly as possible and we speak about months….

QUESTION [Telma Televizija]: Have you received the official letter from Greece that Greece is prepared not to block Macedonia’s membership to NATO? And what exactly have you discussed yesterday in your meeting with Prime Minister Tsipras?

JENS STOLTENBERG [NATO Secretary General]: Mr Tsipras said yesterday, and he reiterated the Greek position that they are ready to welcome the former Yugoslav Republic of Macedonia as aunder its new name as soon as the agreement is fully implemented. And that’s exactly the same message that I convey to you today: that as soon as the agreement is fully implemented through the national processes in the two countries, then your country can be a full member of the Alliance. But we will, already in July – in two weeks – we will invite your country to start accession talks, and then we hope to be able to finish them within months, and as I said, as soon as we have finished the accession talks, we sign the Accession Protocol and then your country, the former Yugoslav Republic of Macedonia will be participating in all NATO meetings and sit around the table together with all the other members.