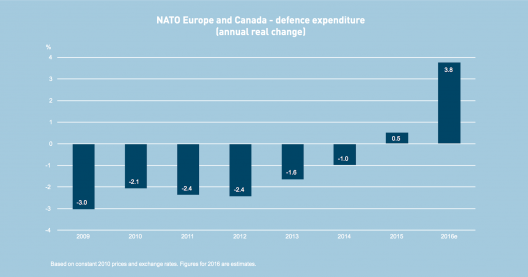 At the Warsaw Summit last year we reaffirmed our pledge to invest more in defence , and to invest better, to stop the cuts, to move towards spending 2% of GDP on defence within a decade and to invest 20% of that defence spending in major equipment.

This shows that we have turned a corner. In 2015, defence spending cuts among European Allies stopped. And 15 Allies increased their defence spending in real terms in 2015. In 2016, our figures show that 23 Allies increased their defence expenditure in real terms. By 3.8 %. Adding up to ten billion US dollars. So, there has been progress. But the job is far from done. We still do not have fair burden-sharing within our Alliance – as you can see in the Annual report. Today, we publish in the Annual Report updated figures for individual NATO Allies. In 2016, five Allies spent 2% or more of GDP on defence. It is realistic that all Allies should reach this goal. All Allies have agreed to it – at the highest level. It can be done.

In fact, as you can see, European Allies together spent 2% of GDP on defence as recently as the year 2000. So meaning that after the Cold War we saw a decline in defence spending but we actually spent 2% of GDP on defence in Europe as late as in the year 2000, meaning that it’s possible to do it again, when we have decided to again start increasing defence spending in Europe and across Canada. And I am also encouraged that Romania plans to reach 2% this year. And both Latvia and Lithuania expect to do the same in 2018.

Of course, burden sharing is not just about spending more. It’s also about spending better, on skilled troops and high-end capabilities. Which is why the 20% target is so important. The number of Allies reaching 20% or more on their defence budget on major equipment has increased to ten. So we must redouble our efforts and that will be another key focus at the upcoming meeting of NATO leaders in May in Brussels.

Excerpt from press conference by NATO Secretary General Jens Stoltenberg at the launch of his Annual Report for 2016; March 13, 2017.