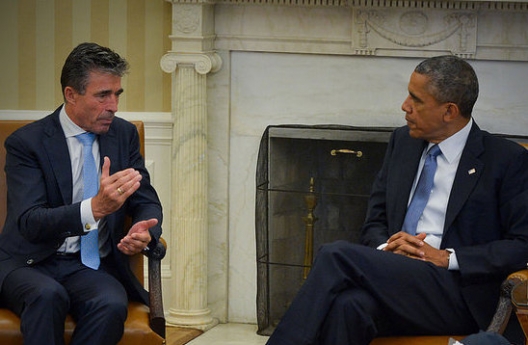 The leader of the North Atlantic Treaty Organization said Tuesday that Russia is continuing to try to destabilize Ukraine, including through a new military buildup on its border , and that Western allies must push forward on efforts to bolster the defense of Europe.

Anders Fogh Rasmussen, secretary-general of the military alliance, said that even though Kiev has gained the advantage in a fight against separatists, the alliance must make increased investments in its own military response force and create a “more visible” military presence in Eastern Europe.

Russia hasn’t overtly responded to the Ukrainian counteroffensive in eastern Ukraine. But Mr. Rasmussen said that Russia throughout the crisis has periodically made moves aimed at reducing Western pressure while continuing to quietly foment instability.

“Whenever the international community puts more pressure on Russia, they take some tactical steps that will defuse the international response, then after a while, they continue covert activities to destabilize the situation,” Mr. Rasmussen said in an interview with The Wall Street Journal. . . .

He also said the alliance must invest in intelligence capabilities and improve the NATO Response Force, a multinational crisis response unit that is supposed to be quickly deployed on a range of missions. Mr. Rasmussen said he wanted to see more European contributions to the force and stepped-up deployments of the U.S. units assigned to it.

He said the force also needs to create elite units that could remain ready to deploy to trouble spots or reinforce defenses in a matter of hours.

“We need to make it more responsive,” he said. “What I could envisage is to develop what I call a spearhead for the NATO response force at high alert.”

Speaking after a meeting with President Barack Obama Tuesday, Mr. Rasmussen outlined what he saw as a continuing threat to Europe by Russian aggression. NATO’s stance toward Russia must change because Moscow’s attitude to the alliance has shifted, Mr. Rasmussen said.

“Russia considers NATO not as a partner but as an adversary,” Mr. Rasmussen said. “If you study Russian military documents and doctrine you will see that they point to NATO as an adversary and a potential threat. Of course, we have to take those words seriously.”