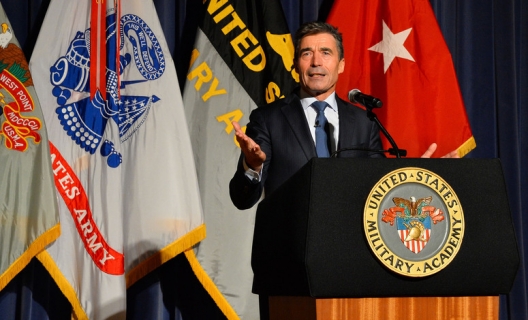 Our Alliance was founded 65 years ago, on the ruins of World War Two and in the shadow of the Cold War. It binds together North America and Europe to ensure our collective security. It safeguards our common values. And it keeps us unified through our common commitment. Article 5 of our founding Treaty states that we consider an attack against one to be an attack against us all. This remains our solemn pledge. All for one, and one for all.

Article 5 has only been invoked once. Not to protect Europe, as we expected during the Cold War. But in support of the United States, immediately after the 9/11 attacks.

So NATO remains vigilant. But we are also carrying out ongoing operations and preparing for the challenges we will face in the future. . . .

For over 60 years, American soldiers, including many West Point graduates, continued to put their lives on the line. To preserve not just American security, but the security of the entire Euro-Atlantic region.

In recent years, many brave Americans have served in Afghanistan. To deny safe haven to international terrorists. And to make Afghanistan strong enough to take charge of its own security. We have done that together. In a coalition of over 50 nations. Led by NATO.

Today, members of the Long Gray Line can be found from Japan and the Demilitarized Zone in South Korea all the way to the Baltic states in northern Europe.

The Long Gray Line has stood firm. And you have not stood alone. NATOs flag is blue. So we must ensure that a long blue line of security continues to protect all our Allies and their freedom.

That tradition of shared sacrifice, that unbreakable bond between North America and Europe, has protected our freedom and security ever since Christian Febiger marched up Stony Point over two centuries ago. This bond is our anchor in a stormy sea of insecurity. And the cornerstone of that bond is the NATO Alliance. An Alliance that we have preserved and strengthened not because we want war, but because we want peace.

Throughout my political career, a belief in the transformative power of freedom has always been my compass. I strongly believe that, no matter what happens beyond our borders, our transatlantic community of nations must remain a beacon of freedom. And that we must be prepared to act whenever necessary to keep the flame of freedom burning bright. So that even when autocracy grows elsewhere, the world will always have a shining example of what it means to be free.