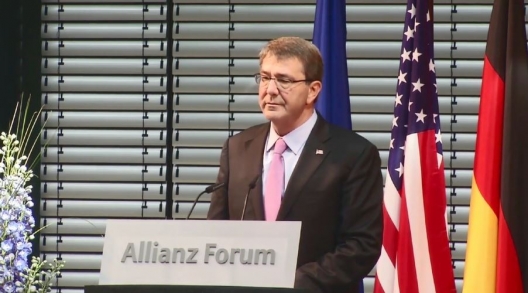 At a time when some have suggested our relationship is suffering from a crisis and others have questioned the staying power of our partnership, we know better. The new threats facing Europe have revealed more of our collective strengths and our collective shortcomings. And our unity – so powerful when intact – will help assure transatlantic security and ensure that we move forward together….

[A]s Russia aggressively modernizes its military capabilities and warfighting doctrine, it’s also actively seeking to undermine NATO and to erode the security and economic ties that bind us all together. And after violating the longstanding INF Treaty, Moscow’s nuclear sabre rattling raises questions about Russia’s commitment to strategic stability and causes us… to wonder about their respect… and whether they continue to respect the profound caution… that world leaders in the nuclear age have shown over decades to the brandishing of nuclear weapons.

The challenges from both the south and the east are different, but both must be addressed with equal vigor. Both require new 21st Century approaches and both the threats – and our responses – to them will define the future of Europe’s security in the transatlantic community for years to come….

To implement new plans and the new play book NATO has to be more capable and able, if necessary, to meet two or more challenges at once. Or as we Americans say, NATO needs to be able to walk and chew gum at the same time. We do not have the luxury of addressing challenges one at a time. Despite the progress since the Wales summit, the challenges and opportunities before us require that the alliance do more. No country can retrench and escape responsibility for confronting the threats that face us all.

Throughout NATO’s history the United States has provided the lion’s share of funding for the alliance. Today we provide 70 percent of all defense spending in the alliance. And make no mistake, America remains capable of and committed to leveraging all the elements of our national power to assure our collective security, but the United States cannot, should not, and will not meet these challenges in Europe alone. The transatlantic relationship and transatlantic security is, as ever, a two-sided affair.

As allies, we must all ensure the Defense Investment Pledge made at last year’s Wales Summit means something. As allies, we must all accept our fair share of security responsibility to each other; and as allies we all must choose to invest in, develop, and field new capabilities now and in the future. Germany is stepping up on this score. Your recent commitment to a six percent defense spending increase puts you on a positive trajectory, but more is required to ensure that Germany’s defense investments match Germany’s leadership role.

That example is important because there’s an undeniable tendency to turn inward here, around Europe, and also in America. We need to guard against that temptation, to move forward together. We need to explain to those who doubt the value of our NATO commitments that the security of Europe is vital to everything else we hold dear….

We will take a new, strong, and balanced strategic approach. We will take necessary steps in the U.S. and NATO capabilities, posture, and plans to deter Russia’s maligned and destabilizing influence, coercion, and aggression, including its efforts to undermine strategic stability and challenge the military balance in Europe. To do so we’ll leverage strong and modern U.S. forces — the greatest fighting force, the world has even known – an adaptive and agile NATO working, as I said, from a new play book; and deepening security partnerships throughout Europe and around the world. Just this week, just this week there are 20 named exercises of U.S. forces in Europe. Just this week.

We will continue to help reduce the vulnerability of allies and partners, not only through military training and support, but also through work to enhance European energy security, and therefore decrease dependence on Russian energy….

We do not seek a cold, let alone a hot war with Russia. We do not seek to make Russia an enemy. But make no mistake, we will defend our allies, the rules-based international order, and the positive future it affords us. We will stand up to Russia’s actions and their attempts to reestablish a Soviet-era sphere of influence.

Excerpts from “US, Germany, & NATO are Moving Forward Together” speech by Secretary of Defense Ash Carter in Berlin, June 22, 2015.