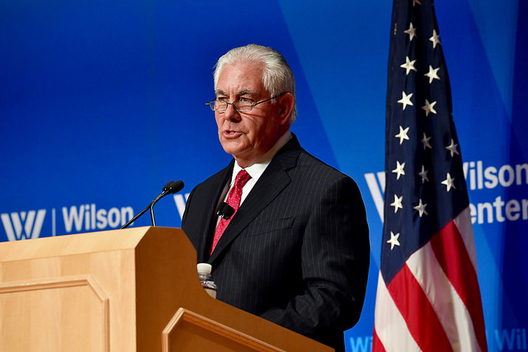 Under President Trump, the United States remains committed to our enduring relationship with Europe. Our security commitments to European allies are ironclad.

If we are to sustain the shared security commitments that ensure stability in the region, the Trump administration views it as necessary for our allies to be strong, sovereign, prosperous, and committed to the defense of shared Western ideals. Over the past 10 months, we have embarked on a new strategic policy that bolsters European and American security: namely, a recommitment to Europe in the wake of the failed “Russia reset;” a new effort to adapt security institutions to combating emerging threats like terrorism, cyberattacks, and nuclear proliferation; and an expectation that European nations accept they are more secure when they contribute more toward their own defense.

This is a message I will repeat in my meetings with NATO and OSCE leaders, and in bilateral meetings in a trip to Europe next week.

The preservation of our liberty begins with guaranteeing that our people can live in safety. To that end, the United States places the highest importance on security relationships with European allies, including NATO. Alliances are meaningless if their members are unwilling or unable to honor their commitments. Earlier this year, President Trump reaffirmed the United States commitment to Article 5 of the NATO treaty because it is the best mechanism we have to deter aggression. And as the text of Article 5 reads, “The Parties agree that an armed attack against one or more of them in Europe or North America shall be considered an attack against them all.” Any attack by any actor on a NATO member-state will trigger Article 5, and the United States will be the first to honor the commitment we have made. We will never forget how NATO members came quickly to stand with us after the September 11th attack, and we will do the same for them if they are attacked.

While the West continues to seek a productive new relationship with post-Soviet Russia, thus far it has proved elusive, as both attempts by the prior administration to reset the Russia and U.S.-Europe relationships have been followed by Russia invading its neighbor Georgia in 2008 and Ukraine in 2014. Russia continues aggressive behavior toward other regional neighbors by interfering in election processes and promoting non-democratic ideals. We, together with our friends in Europe, recognize the active threat of a recently resurgent Russia.

That is why the United States has strengthened its deterrence and defense commitments in Europe through the European Deterrence Initiative, or EDI. Earlier this year, the administration requested $4.8 billion in its budget towards the EDI. This increase of $1.4 billion over the previous year will enhance the U.S. military’s deterrence and defense capabilities and improve the readiness of our forces in Europe. The EDI facilitates training and exercises with our European allies and partners to better integrate our militaries and provide security for Europe. And it will bolster the capacities of our Army, Navy, Air Force, and Marine Corps to deploy assets and support NATO joint exercises. In view of Russia’s Zapad military exercises conducted near the borders of Baltic States in September, our ability to respond to an attack in concert with our allies is more important than ever.

The EDI also includes $150 million to help Ukraine build its capacity for defending its territorial integrity. The United States recognizes that the war in Ukraine – in which people are still dying every day – must come to an end. We have repeatedly urged Russia to begin the path to peace by honoring its commitments under the Minsk agreements. Any resolution of the war that does not entail a fully independent, sovereign, and territorially whole Ukraine is unacceptable. Russia chose to violate the sovereignty of the largest country in Europe. The United States and Europe have stood shoulder-to-shoulder since 2014 in confronting this Russian aggression with a coordinated sanctions policy. Our transatlantic unity is meant to convey to the Russian Government that we will not stand for this flagrant violation of international norms. We hope Russia will take steps to restore Ukraine’s full sovereignty and territorial integrity and fully implement its Minsk commitments, allowing us to begin then the process of restoring normal relations. But let me be clear, Minsk-related sanctions will remain in place until Russia reverses the actions that triggered them….

At Europe’s intersection in the region, we know Turkey cannot ignore Iran because of geographic proximity and cultural ties. But we ask Turkey, as a NATO ally, to prioritize the common defense of its treaty allies. Iran – and Russia – cannot offer Turkish people the economic and political benefits that membership in the Western community of nations can provide.

We recognize the important contributions of our NATO allies that have been made in Afghanistan, and we ask them to maintain their commitment to the mission. The end state of the United States’ new South Asia strategy is to destroy terrorist safe havens and deny their re-establishment while the Afghan Government continues to strengthen its own capacity to maintain security and create the conditions for reconciliation with the Taliban and an inclusive government that accounts for the ethnic diversity of all Afghans. We know this will take time. But if we fail to exercise vigilance and undertake action against the terrorist threat, wherever it is found, we risk re-creating the safe havens from which the 9/11 plot was hatched and carried out. We urge proportionate contributions of troops, funds, and other forms of assistance as we seek to eradicate a terrorist threat that will not be confined to the place where it was born. NATO’s Resolute Support mission is essential to our shared goal of ensuring that Afghanistan develops the capability to contribute to regional stability and prevail over terrorist threats, including al-Qaida and ISIS….

In the darkest hour of World War II, Winston Churchill declared that the British people would fight on the fields, in the beaches, and in the streets to protect their country. Today, our fight is increasingly located on the internet, at passport checkpoints, and in the hearts and minds of young people in Europe and around the globe. European security institutions, including NATO, must be properly adapted to address internal and external threats such as radical Islamic terrorism to address cyberattacks and to address unchecked migration. Though we know these are the threats of the future, too many headlines have already declared these are the threats of today.

New threats to the United States and Europe are long-term, unpredictable in timing, and localized in many different places. Properly anticipating and combating these threats require a greater European commitment to security, because local responders are the most effective deterrent. While the United States will continue to maintain our guarantees against a catastrophic failure of security in the region, and will continue to expend resources to maintain our protective umbrella, the nations of Europe must accept greater responsibility for their own security challenges. Our alliances must be made stronger in the current strategic environment; a lack of diligence and duty will only invite greater risk.

President Trump said in Warsaw, and I quote, “We have to remember that our defense is not just a commitment of money, it’s a commitment of will.” Our expenditures are in some ways a reflection of how much we seek to protect peace and freedom. We once again urge European partners who have not done so already to meet the 2 percent of GDP target for defense spending. This year, Albania, Croatia, France, Hungary, and Romania have newly committed to attaining the 2 percent benchmark. These nations know they must invest in security to preserve liberty. Every NATO member has previously agreed to the Wales Pledge on Defense Investment. It’s time for each of us to honor that agreement. We also urge greater security integration, provided that the relationships are efficient and serve shared interest.

These commitments are necessary because our freedom and security is at stake. The United States and all nations of Europe – especially those who once lived under the weight of communist dictatorships – value our freedoms as nations who can act on our own authority. If we do not exercise responsibility, we will not have sovereignty; and if we do not have sovereignty, we will not have freedom.

Maintaining sovereignty also entails cultivating the virtues that make it possible. Free nations must exercise vigilant protection of civil societies and the groups, families, and individuals that compose them. Rule of law and representative governments are empty shells when detached from a vibrant civil society and a deep respect for certain self-evident truths. We can win every great geopolitical struggle, but if we are not perennially vigilant of our own behavior, our own people may lose in the long run. The preservation of Western ideals depends on how willing we are to protect the core truths upon which our political and economic freedoms are based….

Excerpts from remarks by Secretary of State Rex Tillerson at the Wilson Center, November 28, 2017.