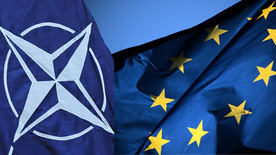 In Europe, many of the tools required for comprehensive security approaches are coordinated through the EU, some members of which have been unwilling to subordinate that organization to NATO. A perceptive British analyst, Julian Lindley French, has provocatively observed that the EU-NATO Strategic Partnership is neither strategic nor a partnership. That needs to change.

Rather than starting with the institutions, as most approaches do, it might be more productive to start with a political commitment by all NATO and EU member states. Such a commitment could be embodied in a “Comprehensive Transatlantic Security Compact” to get all members of the transatlantic community to agree that their future security will be enhanced by cooperation that is not limited to military ties in NATO or the EU. Indeed, at its summit in September, NATO should invite the European Union to join in preparing such an accord.

This transatlantic compact would not be intended to replace or limit either NATO or EU functions. NATO would remain the primary forum for the transatlantic military cooperation essential to deal with future threats. Military forces that do not work together on a continuing basis in peacetime are ineffective and even mutually dangerous in working together under fire. As for the European Union, a “Comprehensive Transatlantic Security Compact” would recognize the EU’s important role in providing essential non-military security instruments, and hopefully helping to enhance European military capabilities.

Russia’s invasion of Ukraine makes crystal clear that transatlantic solidarity remains a vital interest for the United States and its NATO allies. Had a comprehensive security approach, embracing both NATO and the EU, been in place, the transatlantic community could have mounted a clearer, more comprehensive response, including diplomatic, economic, and military measures.

Stanley R. Sloan, author of Permanent Alliance? NATO and the Transatlantic Bargain from Truman to Obama (2010) is a visiting scholar at Middlebury College in Vermont. Professor Sten Rynning , author of NATO in Afghanistan, The Liberal Disconnect, directs the Center for War Studies at the University of Southern Denmark.