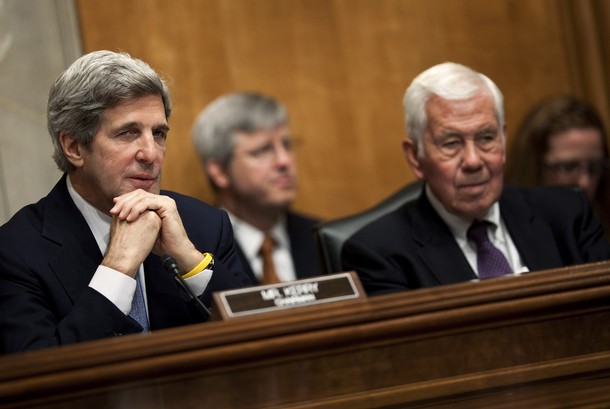 From Kathleen Hennessey, the Los Angeles Times:  The Senate Foreign Relations Committee approved a resolution Tuesday authorizing U.S. involvement in the NATO-led mission in Libya , a small step forward in a stubborn legal stalemate between Congress and the White House over the war.

If adopted by both chambers of Congress, the resolution would permit U.S. involvement for up to one year, but would restrict any expansion of the nation’s role. Four Republican members of the committee joined the Democratic majority to pass the measure on a 14-5 vote.

The White House said President Obama "welcomes" the resolution but insisted that he did not need it under the federal War Powers Act, a point which many in Congress, including Democrats, dispute.

That disagreement has left the three-month-old conflict in a legal limbo. The White House maintains that U.S. involvement is too limited to require congressional authorization, but congressional leaders say the president is violating the War Powers Act.

Although the committee’s action demonstrated bipartisan interest in the Senate in settling the issue, the dispute is unlikely to be resolved soon. The full Senate is not expected to vote on the measure until after returning from next week’s July 4 break. Meanwhile, the House has already rejected an authorization bill, and a bipartisan group of lawmakers is backing an amendment that would cut off funding for the effort.  (photo: Getty)