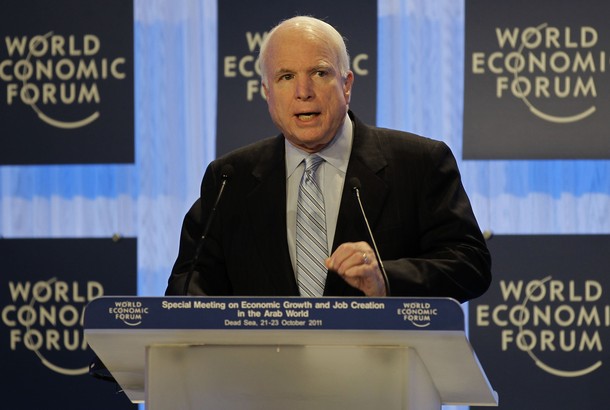 From the AP:   U.S. Senator John McCain said Sunday that military action to protect civilians in Syria might be considered now that NATO’s air campaign in Libya is ending. . . .

“Now that military operations in Libya are ending, there will be renewed focus on what practical military operations might be considered to protect civilian lives in Syria,” McCain said at the World Economic Forum in Jordan. “The Assad regime should not consider that it can get away with mass murder. Gadhafi made that mistake and it cost him everything,” he added, referring to ousted Libyan leader Moammar Gadhafi who was captured and killed last week by fighters loyal to the new government.

It was not clear whether the Republican senator from Arizona was referring to American or NATO military action against the Syrian regime, which has waged a 7-month crackdown on opposition protesters and killed about 3,000 people, according to the U.N.

However, international intervention, such as the NATO action in Libya that helped topple Gadhafi, is all but out of the question in Syria. Washington and its allies have shown little inclination for getting involved militarily in another Arab nation in turmoil. There also is real concern that Assad’s ouster would spread chaos around the region. . . .

Most Syrian opposition groups, inside and outside Syria, also have said they oppose military intervention.

Mohammad Habash, a member of Syria’s outgoing parliament, said such military action “will only bring catastrophes, wars and blood and this is what we don’t wish at all.”  (photo: Getty)