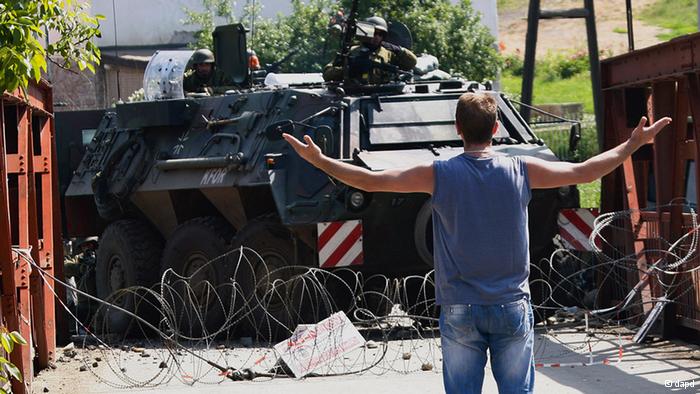 From Deutsche Welle:  Serbs clashed with NATO troops in northern Kosovo on Friday after they moved in to try to take down a roadblock. The incident threatens to fuel the already high tensions in Kosovo’s mainly Serb north. . . .

The trouble broke out after German KFOR soldiers attempted to dismantle a roadblock erected at a bridge near the town of Zvecan by Serbs. Several hundred Serbs turned up at the blockade and pelted the troops with rocks.

The soldiers used tear gas to prevent more Serbs from approaching the area. Witnesses also reported that NATO troops fired rubber bullets, while some protesters fired back with handguns.

Serb officials said at least three demonstrators had been injured, while NATO confirmed that a soldier had also been hurt.

“One KFOR soldier has been wounded, has been evacuated and he is stable,” NATO spokesman Uwe Nowitzki said. “KFOR will respond in self-defense accordingly if that is necessary,” he added without elaborating.  (photo: AP)