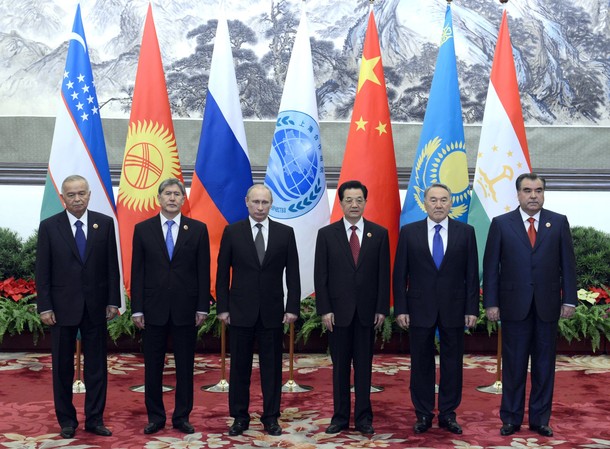 From the AP:  Central Asian states meeting in Beijing this week say they want a role in stabilizing Afghanistan after most U.S. combat troops leave at the end of 2014 , with China’s economic juggernaut leading the charge.

The war-torn nation’s future is expected to feature prominently in discussions by leaders of the six nations that make up the Shanghai Cooperation Organization. The bloc, which includes China, Russia, and four Central Asian states, seeks closer security and economic ties among its members, most prominently through regular meetings and joint military exercises targeting separatists, religious extremists and drug traffickers.

“We will continue to follow the concept that regional affairs should be managed by countries in the region, that we should guard against shocks from turbulence outside the region, and should play a bigger role in Afghanistan’s peaceful reconstruction,” Hu said. . . .

Dominated by the Russia and China, the SCO is widely seen as useful to them as a foil to U.S. influence in Central Asia.

Underscoring close relations between Beijing and Moscow, Russian President Vladimir Putin told China’s vice president on Wednesday that the sides were committed to boosting cooperation between their militaries.

Warming ties between China and Russia have counterbalanced U.S. influence and shielded Syria from international moves to halt its crackdown on a 15-month uprising. . . .

Foreign Ministry spokesman Liu Weimin told reporters Wednesday that the development of Afghanistan was “closely linked to security and stability” in the region, and that Afghanistan becoming an observer member of the SCO will speed up security and economic cooperation.

The U.S. Defense Department has estimated the value of Afghanistan’s mineral reserves at $1 trillion. Other estimates have pegged it at $3 trillion or more.

In December, China’s state-owned National Petroleum Corp. signed a deal allowing it to become the first foreign company to exploit Afghanistan’s oil and natural gas reserves. That comes three years after the China Metallurgical Construction Co. signed a contract to develop the Aynak copper mine in Logar province. Beijing’s $3.5 billion stake in the mine is the largest foreign investment in Afghanistan.

China’s government has also contributed substantial aid to Afghanistan over the past decade in the form of training and equipment for some security units and government offices, infrastructure investment, and scholarships for Afghan students.  (photo: Getty)