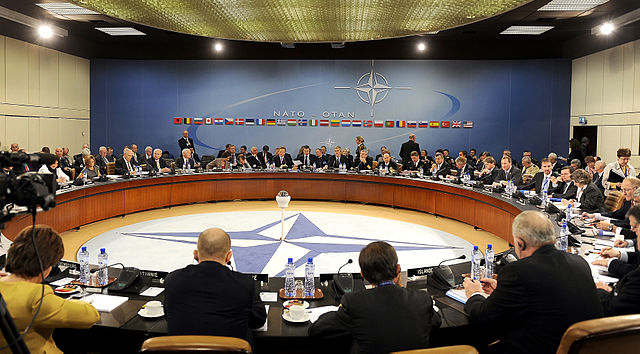 “Britannia’s 19 Ships Can’t Rule a Single Wave” was a recent headline in London’s Sunday Times. “France To Cut 34,000 Military Personnel Under A Proposed Six-Year Defence Budget” ran a Reuters headline in August. “In Medium Term, German Defence Budget Will Decline to 32.5 Billion Euros by 2015/16” ran another last November. “UK Armed Forces Smallest Since the Napoleonic Wars” reports London’s Daily Telegraph. Meanwhile the NATO “rule” that every member country spends at least 2% of its GDP on defence is now recognized more in the breach than the observance, with Germany running at roughly 1.5%, Italy at 1.2%, and Spain less than 1%. Yet taken as a whole, the European Union has a GDP that outstrips either China or the United States. Never in the field of human conflict avoidance has so little been given by so many for so much. . . .

The nuclear umbrella that the U.S. threw over NATO countries under Article Five of its constitution–which states that an attack on one is an attack on all–back in the late 1940s has now become a financial umbrella too, protecting Western European countries from having to stump up properly for their defence to anything like the degree that they would have to if there were no such thing as the USA. . . .

The Germans have long been effectively blackmailing the United States into continuing to provide their security on the cheap. It is now a long-standing, much-loved tradition that every retiring NATO secretary-general delivers a farewell speech in which he says that European countries need to spend more on defence, but frankly until the United States starts to make credible threats there’s simply no incentive whatever for Europeans to become net providers of security as opposed to inveterate, addicted consumers of it. . . .

The countries of the world that are significantly increasing their military spending–Russia, China, India, Japan, Brazil, the Gulf States–are putting short-term fiscal priorities to one side in order to pursue capabilities that clearly aren’t obsolete in our still-dangerous world, one where threats have historically tended to appear suddenly and without warning. It is hard to think of historical parallels for a great conglomeration of trading nations such as Europe which for decades piggy-backs off an ally without any ultimately negative result.

Is it too much to hope for the day when an American president who understands brinksmanship visits NATO headquarters in Belgium, looks the Europeans in the eyes, and says: “Please could everyone from countries not spending at least 2.5% of its GDP on defence kindly leave the room, and not come back till they are. In the meantime, as far as America’s concerned, Article Five only covers those of us who remain.”

Andrew Roberts is honorary senior scholar at Cambridge and a member of the Military History Working Group at the Hoover Institution.  (via Edward Lucas)