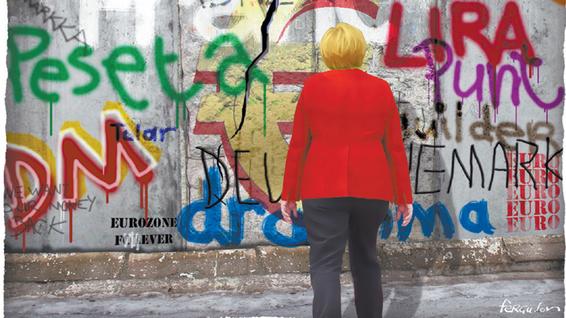 From Philip Stepgens, the Financial Times:  The conviction that, whatever else happened, the state and socialist system were immutable, proved the downfall of Soviet policy makers. If you think that something cannot happen, then you are unlikely to take the necessary preventive action. Mr [Ivan] Krastev notes that Mikhail Gorbachev’s mistake was to believe in the innate superiority of socialism. That meant it could be sustained but not reformed. . . .

For all the differences, the parallels with the Soviet Union are still beguiling. I have lost count of the times I have been told by European politicians and central bankers that the euro will survive because, well, it was unthinkable to consider any other outcome. The cost of failure, this argument runs, would simply be too high.

Yet this conviction – and I am sure it is genuine – offers an increasingly threadbare shield against the gathering economic and political storms. The Soviets thought that doing nothing would preserve the status quo. They learnt subsequently that inaction is a decision like any other. To say that break-up of the euro would wreak havoc on the European and global economies will not of itself prevent it from happening.

As Mr Krastev observes, public opinion across Europe is turning against the single currency – or at least against the economic cost of sustaining it. At times of crisis, the popular response to “there is no alternative” may well turn out to be that any alternative is better.

We are not there yet. European leaders, however, need to recognise that there is nothing immutable about the eurozone – nor, for that matter, about the EU. These institutions are the product of historical circumstance and political vision. Today’s world is not the one imagined by the founding fathers of the EU nor by the architects of the single currency.

The end of the cold war served as midwife at the birth of the euro. The grand project of monetary union had been talked about many times before but it was collapsing communism and German reunification that produced the final push. Unlike the Soviet Union, the eurozone is not predestined to collapse under the weight of its own contradictions, but neither is its survival inevitable.  (graphic: Financial Times)