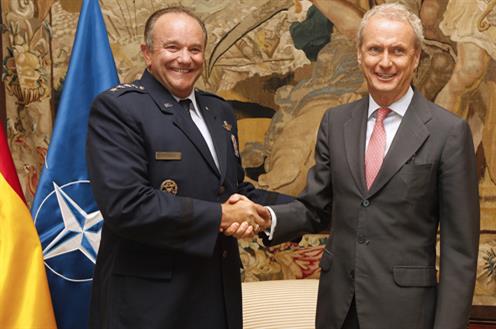 NATO Secretary General Anders Fogh Rasmussen described the Russia/Ukraine crisis as “the gravest threat to European security since the end of the Cold War.” How the Alliance responds to this growing threat beyond NATO’s eastern borders will be the main story at the summit this week. But in Spain and Portugal, the Russia/Ukraine crisis will probably be considered no higher than their third national security priority. Madrid and Lisbon feel much more threatened by their severe economic crisis and the spread of instability and violence in North Africa and the Sahel. These two other priorities will greatly influence the positions of Spain and Portugal on the key decisions made at the NATO summit.

In responding to the Russia/Ukraine crisis, Spain and Portugal will support the cohesion and unity of the Alliance. In fact, they are already contributing to NATO operations to reassure allies close to the threat from the East. This week, six Portuguese F-16s, along with aircraft from Germany, Canada, and the Netherlands, are participating in the new rotation of NATO’s Baltic air policing. This is the second time Portugal has contributed fighters to this multinational NATO mission. Spain has also offered fighter jets for Baltic air policing and naval vessels for NATO maritime exercises.

Spain and Portugal will endorse NATO plans to increase exercises in Central Europe and for the prepositioning of equipment and supplies in the region, as well as a small, high readiness force to strengthen deterrence. These are all part of NATO’s new “continuous” military presence in eastern allies while the Russia/Ukraine crisis continues.

But Spain has been one of the members of NATO reluctant to give eastern allies the permanent NATO military presence they believe is now required. Part of this is because the threat from the East is not perceived to be as great in Madrid as it is in Warsaw. But it is also due to Spain’s relationship with Russia. Madrid has what the Elcano Royal Institute’s Félix Arteaga describes as a strategic partnership with Moscow; similar to the one Russia has with Germany, France, and Italy.

It will be important for Spain and Portugal that the Alliance not focus exclusively on the threat from the East. The Iberian allies see a threat across the Mediterranean that is both closer and more imminent than Russian President Vladimir Putin’s “little green men.” Spain and Portugal will make sure to remind their allies that due to the deteriorating situation in Libya and elsewhere, the Alliance must also invest attention and resources to NATO’s vulnerable southern flank. Spain’s Minister of Defense Pedro Morenés has warned NATO that “a weakness on one flank is a weakness for the entire organization.”

Another major issue at the summit will be President Barack Obama’s emphasis on addressing the imbalance within the Alliance on defense spending. In Wales, it is most likely all twenty eight members will renew their commitment to improve defense spending. But, in light of the fact that only four members currently meet the NATO standard they promised in 2006 (spending 2% of GDP on defense), it is also most likely that the majority of allies will continue to fall short of their defense commitments.

According to NATO, Spain spent only .9% of its GDP on defense last year and Portugal spent 1.5%. While some NATO members such as Poland, Latvia, and Lithuania have announced increases in defense spending, Spain and Portugal are among the allies that have not. This is unlikely to change much as these countries to continue to make overcoming their economic crisis their main national priority.

Nevertheless, Spain and Portugal are making significant contributions to NATO even with these budgetary constraints. Their highest profile contributions will be to co-host (along with Italy), NATO’s large scale exercise in 2015, Trident Juncture. Both nations are also currently contributing troops to the ISAF mission in Afghanistan and have provided warships for NATO’s counter piracy operation, Ocean Shield. Spain also has a special role in missile defense, hosting US Arleigh Burke-class guided-missile destroyers at the naval base in Rota.

At the Wales summit, NATO heads of state will endorse a landmark change in cyber policy; Article 5 will cover cyber attacks against NATO members. Spain is a leader in cyber security and supports efforts to improve NATO’s cyber defenses. Madrid adopted a National Cyber Security Strategy last December and created a National Cyber Security Council to oversee its implementation. Spain is also a founding member of NATO’s Cooperative Cyber Defense Center of Excellence (CCDCOE) in Tallinn, Estonia. Portugal is not a member of the CCDCOE and does not have a national cyber security strategy, but it does have a national computer security incident response team (CSIRT).

The leaders of Spain and Portugal may not draw the most media attention at the Wales summit, but the contributions of Madrid and Lisbon will help reassure NATO allies and improve deterrence in Europe. Spain and Portugal will also play important roles in protecting NATO’s southern flank and remind allies of the dangerous security threats just across the Mediterranean. In these tumultuous times, NATO needs responsible and capable members to address the multiple threats along its periphery.

Dr. Benitez is the director of NATOSource and a senior fellow at the Atlantic Council.