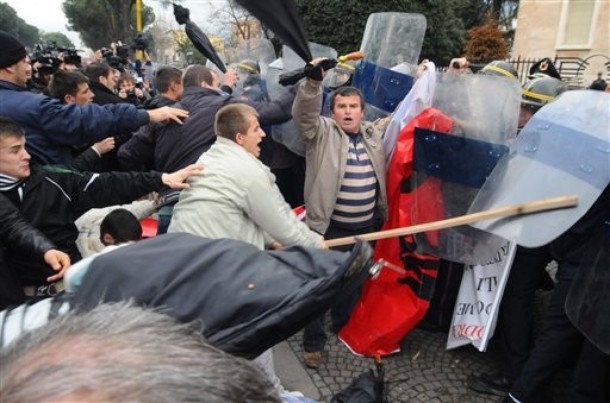 From Daniel Korski, the International Herald Tribune:  One moment Albania is Lonely Planet’s “must-see” destination for 2011, a NATO member whose citizens enjoy visa-free travel into the European Union; the next, government forces are shooting and killing protesters on the streets and the British Foreign Office is warning visitors to avoid large crowds in Tirana.

Albania, which escaped a North Korea-style dictatorship in 1990 only to collapse violently in 1997, now teeters on the brink of another catastrophe. …

The European Union has in recent years focused its attention elsewhere in the Balkans. Now, however, the E.U. needs to make clear that Albania’s politicians must step away from the use of violence and end their destruction of the country’s institutions.

If not, then Albanians will lose their visa-free access to Europe and their country will forgo any serious chance of E.U. membership. Even the country’s NATO membership could be at risk.

To show her concern, Catherine Ashton, the E.U.’s first high representative for foreign policy, should send a senior mediator to Albania. A commission of ex-presidents should be set up to investigate the recent violence. The international community should organize and run an extraordinary parliamentary election next year, sending an unambiguous message that Albania’s institutions are no longer trusted or capable of doing so themselves. A new government should be held to a concrete agenda for reform. That may finally stop Albania’s politicians sawing through the country’s institutions. If it doesn’t, the impact will be felt beyond the borders of Albania.

Daniel Korski is a senior fellow at the European Council on Foreign Relations. (photo: AP)