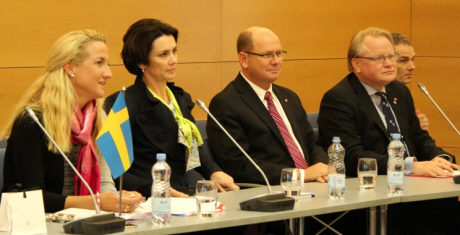 The Swedish Parliamentary Defence Commission (Försvarsberedningen) presented its defence report to Minister for Defence Karin Enström on 15 May. . . .

The Defence Commission states that our view on Russia’s political intentions must change and consequently also our view on security developments in our part of the world.

The Commission states that: “The Nordic and Baltic Sea region is characterised overall by stability, dialogue and cooperation. The policies pursued by Russia, on the other hand, are unpredictable and destabilising. It is inconceivable that a military conflict in our region would only affect one country. A separate military attack directly targeting Sweden remains unlikely. However, crises and incidents – including those involving military force – may also occur and in the longer term the threat of military attack can never be ruled out. Russia’s aggression towards Ukraine demonstrates that the risk of this has increased, also in our region (närområde). . . .”

The Commission concludes that co-operation with Nato should continue to be developed within the framework of the Swedish partnership. Sweden should, the Commission argues, strive towards a differentiated partnership concept that can be adjusted according to the will, needs and ability of partner countries.

The Commission considers that Sweden should continue to seek to promote closer co-operation among Nordic countries, as well as with the Baltic countries, Poland and Germany. Nordic cooperation is a complement to, not a replacement for, existing EU and NATO cooperation.

As line with Government policy, The Commission states that “Sweden will not remain passive if another EU Member State or Nordic country suffers a disaster or an attack. We expect these countries to take similar action if Sweden is affected. Sweden must therefore be able to give and receive civilian and military support.”