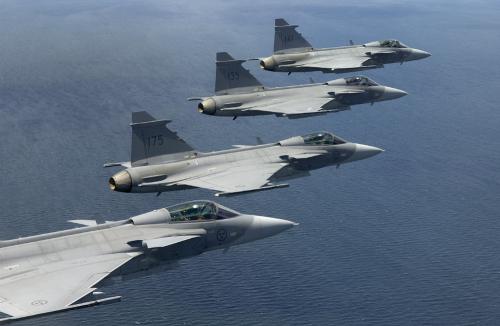 From the Local:  Sweden’s Riksdag on Friday voted overwhelmingly in favour of Sweden sending JAS Gripen fighter aircraft to Libya to monitor a UN-backed no-fly zone.

The parliament voted through the proposal by a resounding 240 to 18, with five abstentions.

"Sometimes the risk of intervening is less than the risk of not doing so," said foreign minister Carl Bildt in reference to concerns that the intervention could, in a worse case scenario, harm civilians. …

The vote clears the way for the Swedish air force’s first international deployment in 48 years.

Swedish Prime Minister Fredrik Reinfeldt said Tuesday he would put to parliament the proposal of sending eight Swedish-built fighter jets, a transport plane and a reconnaissance plane to Libya, stressing Swedish jets would not be involved in ground strikes. …

The Nordic country is not a member of NATO, although it has been in NATO’s Partnership for Peace programme since 1994 and participates in the alliance’s International Security Assistance Force (ISAF) force in Afghanistan with some
500 troops.

Sweden’s air force has not been involved in action since 1963, in a UN-mandated operation in the former Belgian Congo.  (photo: Katsuhiko Tokunaga/Gripen International)