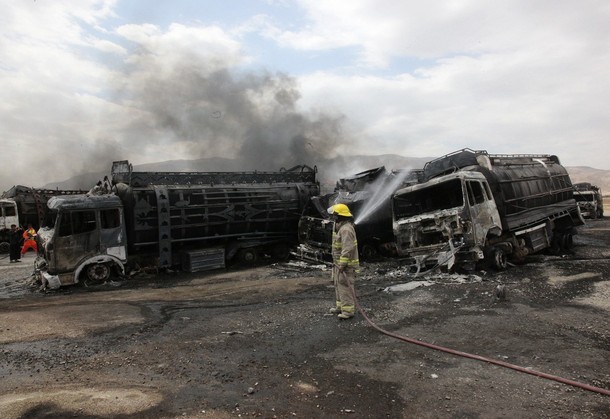 From Mirwais Khan, the AP:  As the United States trumpeted its success in persuading Pakistan to end its seven-month blockade of supplies for NATO troops in Afghanistan, another group privately cheered its good fortune: the Taliban.

One of the Afghan war’s great ironies is that both NATO and the Taliban rely on the convoys to fuel their operations — a recipe for seemingly endless conflict.

The insurgents have earned millions of dollars from Afghan security firms that illegally paid them not to attack trucks making the perilous journey from Pakistan to coalition bases throughout Afghanistan — a practice the U.S. has tried to crack down on but admits likely still occurs.

Militants often target the convoys in Pakistan as well, but there have been far fewer reports of trucking companies paying off the insurgents, possibly because the route there is less vulnerable to attack.

Pakistan’s decision to close its border to NATO supplies in November in retaliation for U.S. airstrikes that killed 24 Pakistani troops significantly reduced the flow of cash to militants operating in southern and eastern Afghanistan, where the convoys travel up from Pakistan, said Taliban commanders.

Pakistan reopened the supply route in early July after the U.S. apologized for the deaths of the soldiers. The two countries signed a formal agreement regulating the shipment of troop supplies to and from Afghanistan on Tuesday.

"Stopping these supplies caused us real trouble," a Taliban commander who leads about 60 insurgents in eastern Ghazni province told The Associated Press in an interview. "Earnings dropped down pretty badly. Therefore the rebellion was not as strong as we had planned."

A second Taliban commander who controls several dozen fighters in southern Kandahar province said the money from security companies was a key source of financing for the insurgency, which uses it to pay fighters and buy weapons, ammunition and other supplies.

"We are able to make money in bundles," the commander told the AP by telephone. "Therefore, the NATO supply is very important for us. . . ."

The U.S. military estimated last year that $360 million in U.S. tax dollars ended up in the hands of the Taliban, criminals and power brokers with ties to both.  (photo: Reuters)