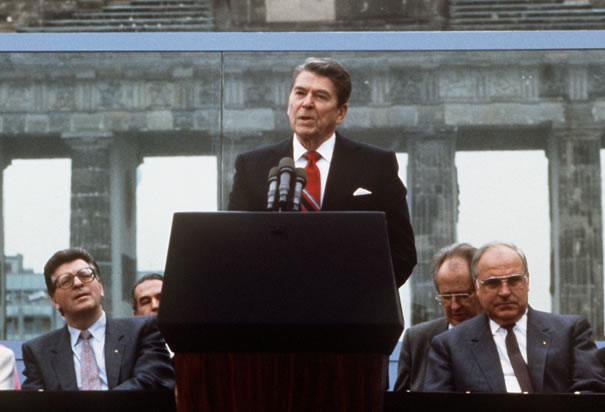 From Ronald Reagan, the Reagan Foundation:  We hear much from Moscow about a new policy of reform and openness. Some political prisoners have been released. Certain foreign news broadcasts are no longer being jammed. Some economic enterprises have been permitted to operate with greater freedom from state control. Are these the beginnings of profound changes in the Soviet state? Or are they token gestures, intended to raise false hopes in the West, or to strengthen the Soviet system without changing it? We welcome change and openness; for we believe that freedom and security go together, that the advance of human liberty can only strengthen the cause of world peace.

From Romesh Ratnesar, TIME:  By the time Reagan went to Berlin in 1987, he and Gorbachev had developed enough trust to gamble on change. In the weeks leading up to the speech, several Administration officials lobbied to have the "tear down this Wall" line removed, arguing that it was unrealistic, unpresidential and potentially embarrassing to Gorbachev. But Reagan and his speechwriters insisted on keeping it in. To the President, the line was an invitation as much as a challenge: calling on Gorbachev to tear down the Wall might actually inspire him to do it. "If he took down the Wall," Reagan told an aide after returning from Berlin, "he’d win the Nobel Prize."

Reagan was right. (In 1990, Gorbachev not only won the Nobel but was named TIME’s Man of the Decade.) Neither Gorbachev nor Reagan was directly responsible for the fall of the Wall; rather, it collapsed from its own weight. But Reagan’s speech presciently identified Berlin as the proving ground of Gorbachev’s intentions to open up the communist bloc. If Gorbachev truly sought peace and liberalization, Reagan said in Berlin, then he should let the Wall come down. In the end, Gorbachev did, and the rest of the Iron Curtain followed. Allowing democracy to spread through Eastern Europe in 1989 was Gorbachev’s greatest accomplishment; in this drama, Reagan was the supporting actor. Nevertheless, as Sean Wilentz, a liberal historian, wrote in 2008, Reagan’s "success in helping to finally end the Cold War is one of the greatest achievements by any President of the United States–and arguably the greatest single achievement since 1945."  (photo: jenzellers.com)