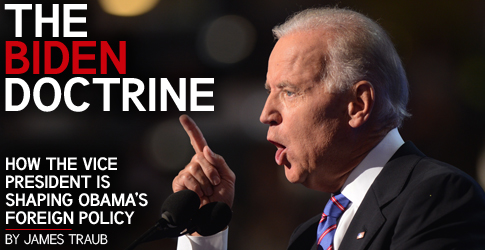 From James Traub, Foreign Policy:  In a White House where foreign policy is made, to an extraordinary extent, by the president and a few close advisors, [Vice President Joe] Biden is first among equals. It is safe to say that on foreign policy, Biden is the most powerful U.S. vice president in history save for his immediate predecessor, Dick Cheney. . . .

Biden has played a central role in White House decisions on policy in Afghanistan, Russia, China, Israel, and the Arab world, and his worldly pragmatism has helped shape a White House posture less starry-eyed, and perhaps also less hopeful, than many had expected at the outset of Obama’s tenure.

Biden was chairman of the Senate Foreign Relations Committee when Obama asked him to be his running mate in 2008, and he confided to friends that he feared his second-banana role would reduce rather than increase his influence over foreign policy. But in January 2009, Obama asked Biden to travel to Pakistan and Afghanistan to help him figure out what needed to be done there. Once Obama took office, he dispatched Biden to the Balkans, to Lebanon, and to Georgia and Ukraine to put out fires and issue strategic reassurances — though Biden started a small fire of his own when he returned from this last trip to say that Russia had a "withering economy." The president asked him to deliver a key strategic address in Munich, where Biden coined the term "reset" to describe the administration’s plan to restore relations with Russia as part of the new paradigm of "engagement." Biden quickly became a chief strategist, devil’s advocate, and implementer of White House foreign policy. . . .

The combination of intellectual vanity and sheer lack of impulse control renders Biden almost physically incapable of not saying what’s on his mind (though he has gotten noticeably better at biting his tongue in the face of leading questions from Sunday morning talk show hosts). He is also an exuberant cheerleader, teammate, and coach who wants everyone to hold hands in the huddle. The Obama foreign-policy team has remained broadly collegial (far more than on the domestic side) despite immense pressures, and Biden has played a role in damping down conflict among the (somewhat overhyped) "team of rivals."

Biden hadn’t wanted a specific portfolio of his own, but the president gave him one. At an NSC meeting in June, 2009, he turned to Biden and said, "Joe, you do Iraq." (Biden had been deeply involved in Iraq as a senator, and had once proposed a partition plan for the country from which he later backed away.) Biden has made seven trips to Iraq since Obama’s directive. It is a job tailor-made for a career politician who loves plotting strategy, brokering compromise, talking about the wife and kids, squeezing a shoulder, an arm, a knee, or any other body part that hoves into view. Biden still spends a quarter or so of his time trying to prod Iraq’s endlessly bickering Shiite, Sunni, and Kurdish leaders into working with each other rather than trying to kill each other. Exactly how successful he’s been is a matter of dispute. A recent report by Anthony Cordesman of the Center for Strategic and International Studies concludes that as tensions rise among competing ethnic blocs, "a political crisis seems likely if not inevitable." Cordesman also notes that the withdrawal of U.S. troops in 2011 has both sharply reduced American influence and increased sometimes lethal political jockeying. On the other hand, as [Biden’s national security advisor Antony] Blinken points out, Prime Minister Nouri al-Maliki and his chief rivals are still competing through politics, not gunfire. . . .

Over the last few years, and especially amid the Arab Spring, events have forced the Obama White House to choose between its prudential instincts and its great ambitions. In almost every case Biden has sided with the skeptics. In January 2011, massive crowds took to Tahrir Square demanding that Hosni Mubarak, Egypt’s hated autocrat, step down. Biden viewed Mubarak as a staunch ally, and opposed those in the administration who wanted Obama to publicly demand that he leave office. He called Mubarak, whom he had know for decades, as well as intelligence chief Omar Suleiman, and implored them to establish a plan for transition. Only when Mubarak proved intransigent did Biden change his view.

Biden also opposed the intervention in Libya (as did Tom Donilon and Robert Gates, then the defense secretary). "It didn’t go to core interests," a senior White House official says in explaining Biden’s views. "It wasn’t something he thought was necessary to do." Biden told me that he had supported a humanitarian intervention in the Balkans in the mid-1990s because chaos and violence in Europe threatened American national security, and because we had "the wherewithal to intervene and determine an outcome." In Libya, too, we had the wherewithal, but not the national interests; by Biden’s calculus, that meant that we should stay out. Biden’s innate skepticism also led him to advise Obama against conducting the raid on Osama bin Laden’s compound until he had a higher degree of certainty that the al Qaeda leader was, in fact, there. Soon afterwards, Biden was telling audiences that you could "go back 500 years" without finding "a more audacious plan" — precisely because the chance of success had been so low. It was classic Biden: He went from caution to hyperbole in a matter of hours.

Biden has often been on the losing side of major White House debates; that may be the inevitable consequence of playing the role of spoiler. But if you step back, overall Obama administration policy looks very much like Biden’s tempered realism, Kennanite but not Kissingerian. Obama has refused to intervene in Syria despite the toll of more than 30,000 dead in its ever-bloodier civil war, and only gently criticized autocratic allies like Bahrain, whose monarchy has undertaken a major crackdown since protests began in the early days of the Arab Spring. The White House has largely stopped pushing on the closed door of Middle East peace. Despite provocations from President Vladimir Putin, it has continued to pursue the reset with Russia — albeit with much less success than it enjoyed in the first two years of the Obama administration. The result is that while Obama has greatly disappointed human rights advocates and many of his own idealistic supporters, he has left a very small target for his Republican challengers when it comes to his foreign policy.  (graphic: Foreign Policy)