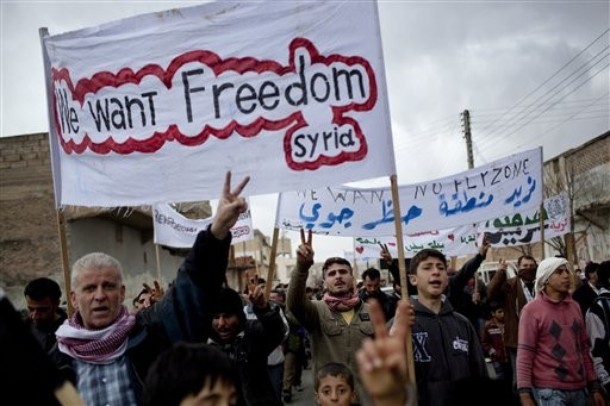 From Stephen J. Hadley, the Washington Post:  The moral case for arming Syrians seeking their freedom has become overwhelming. The world has rarely seen such courage, fortitude and restraint. Despite an unrelenting crackdown by the Assad regime, brave Syrians have kept up their civil resistance campaign for 11 months.

Despite systematic attacks by Syrian armed forces that have killed thousands and wounded tens of thousands, the resistance has, until recently, largely refrained from taking up arms. Surely few people are more entitled to the means to defend themselves in the face of escalating regime brutality.

Arming Syrians who are seeking their freedom would have its costs. Bashar al-Assad will brand it as outside intervention and wrap himself in the Syrian flag. His efforts to rally, especially, uncommitted Syrians to his side in defense of Syrian sovereignty will further divide an already-riven society. And it may not force the Assad regime from power anytime soon.

Yet that is what is desperately required.

Saying that Assad has lost legitimacy and ultimately will fall is cold comfort. The longer this struggle goes on, the more militarized it will become. The more militarized it becomes, the more Syria’s future will be dictated by who has the most guns, not who gets the most votes. Look at the Libyan Transitional National Council’s struggle to control that country’s various militias, and contrast that with the more democratic evolution in Tunisia.

And the more militarized the Syrian struggle becomes, the greater the opportunity for al-Qaeda. Events in Somalia and Yemen show how al-Qaeda thrives on chaos and violence. For the sake of preserving human life and a democratic future for Syria, the Assad regime needs to go now. . . .

If outside help is needed, it should come in the form of arming the Syrians seeking their freedom. We need to start build support for this option. The United States will need to take the lead in any arming effort so that it does not become a vehicle for a proxy war in Syria between competing regional states but, instead, contributes to building a safe, stable, democratic Syria for all its people.