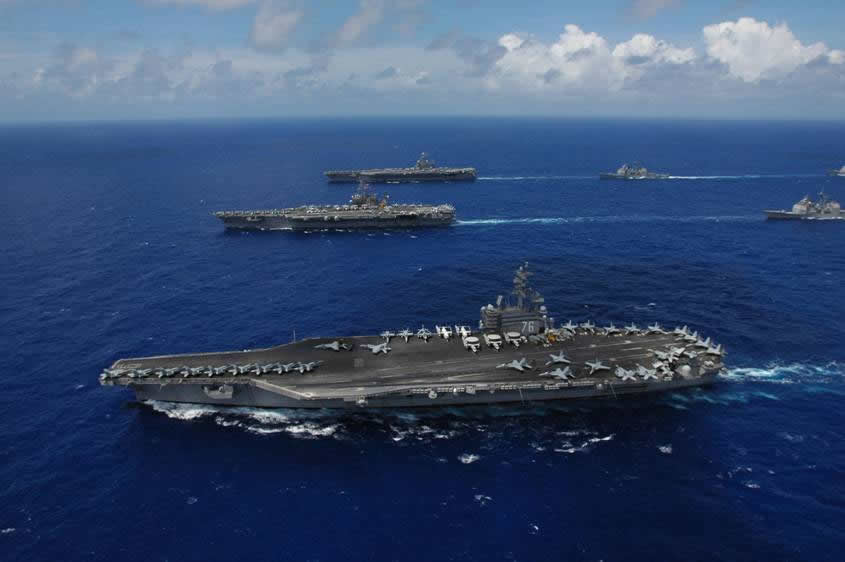 From James Holmes, the Diplomat:  If the United States can no longer afford two navies, it may have to resurrect an older tradition for managing commitments, assets, and risk. Naval historian Alfred Thayer Mahan was a founding father of this tradition. . . .

Mahan’s chief worry was that politicians would divide up a middling-sized navy into standing Atlantic and Pacific fleets, creating two lesser fleets and in the process forfeiting the advantages of concentrated naval might. Partitioning a navy built to the one-power standard, that is, would leave each contingent weaker than its hypothetical enemy. Russia had fragmented its navy among Baltic, Black Sea, and Far Eastern fleets before fighting Japan (1904-1905). The Russian Navy paid the price for St. Petersburg’s strategic illiteracy. Wreckage from its Pacific and Baltic fleets littered the bottom of the Yellow Sea and the Tsushima Strait following disastrous encounters with the Japanese Combined Fleet, which was inferior to the combined Russian Navy but superior to every detachment hurled at it.

In 1914, at the outbreak of World War I, Mahan, ex-President Theodore Roosevelt, and Assistant Secretary of the Navy Franklin Roosevelt debated where to station the fleet. The three sea-power proponents agreed that it should concentrate in the Pacific.  . . .

Today’s strategic questions represent a throwback of sorts to the debate among Mahan, TR, and FDR. For Mahan the benchmark for naval preparedness was “the estimated force which the strongest probable enemy can bring against you,” factoring in not only the size and capacity of his maritime forces, but also political entanglements that siphoned his forces to far-flung parts of the world. A glance at the map reveals two prospective adversaries for the United States and its allies, namely China and Iran. Both worry mainly about managing their own surroundings. Both can mass forces close to home. Neither has compelling interests that disperse its military forces to faraway theatres. And the chances of their ganging up on the U.S. Navy are remote.

So the U.S. Navy must prepare to face – or face down in crises short of war – a single opponent fighting with full force near its own shores. And it must do so with diminishing resources. As the Carl Vinson example implies, naval leaders and their political masters must be more choosy about priorities amid fiscal austerity.

Here’s how things shape up geo-strategically. Cold War theatres like the Atlantic Ocean and the Mediterranean Sea no longer appear that menacing, while the Western Pacific and the Indian Ocean could witness exciting times indeed. U.S. leaders now look to Asia, but not wholeheartedly – yet. Navies are can-do services. They find it hard to part with longstanding habits and commitments. Washington’s 2006 Quadrennial Defense Review prodded the navy in that direction, directing the service to reposition 60 percent of its nuclear-powered attack submarines to the Pacific Ocean. That realignment is now complete.

But the time may come when U.S. political and military leaders must make the painful choice to concentrate the whole battle fleet there, embracing anew the logic of the Roosevelts and Mahan. Safe expanses to North America’s east, turbulent waters to its west, and an ever-shrinking fleet: the case for a one-power standard looks more compelling by the day.

James Holmes is an associate professor of strategy at the US Naval War College. The views voiced here are his alone.  (photo: Chief Photographer’s Mate Todd Cichonowicz/US Navy)  (via Real Clear World)