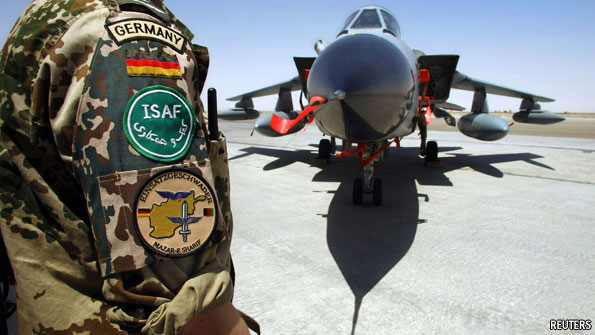 From the Economist:  Next week’s NATO summit in Lisbon is likely to be one of the most crucial in the 61-year history of the military alliance. Officially, the 28 members are meeting mostly to approve a new “strategic concept” that frames the threats NATO faces and the ways in which it should defend against them over the next decade. …

The new strategic concept itself should be easy to agree to. It is a sensible document, the result of a report drafted by a “group of experts” led by a former American secretary of state, Madeleine Albright. Last month NATO officials were claiming that it was “98% there”, and although members continue to differ on some issues, such as the alliance’s future nuclear posture (of which more later), those will be papered over in Lisbon. …

NATO is still in Afghanistan after nine long years, many of them characterised by America’s neglect of the campaign while it was bogged down in Iraq. Even today, nearly a third of the forces in Afghanistan are non-American, most of them from Europe. Mr Rasmussen has also been more successful than expected in persuading members to meet Mr Obama’s request last year for 10,000 additional troops. At every bilateral meeting he has banged the drum for more.

It remains an open question whether NATO can or should mount another such mission out of area. It is still a regional, not a global, organisation, but threats to its members can come from anywhere in the world. That said, it is hard to imagine NATO wanting to tackle anything as tough or as complex as Afghanistan again.

NATO’s record there provides ammunition for both sides of the debate about its future. Many (possibly including Robert Gates, America’s defence secretary) agreed with an article by Fred Kaplan, a commentator, in Slate, an online magazine, last February suggesting that, although America had gained from having fighting allies in Afghanistan, it had been wrong to let NATO lead the mission. Dragging in member countries that would rather not be there, he wrote, served nobody’s interests.

Eric Edelman, an undersecretary of defence for policy in the Bush administration, says that Afghanistan has shown the limits of what NATO can do. In “Understanding America’s Contested Primacy”, a pamphlet for the Centre for Strategic and Budgetary Assessments, a Washington-based think-tank, he argues that although NATO still has value as a regional alliance, for demographic, economic and cultural reasons it will be increasingly hard pressed “to generate substantial useful military capability”. He recommends developing partnerships with countries such as India, Brazil and Australia, which may be willing and able to do more than America’s traditional allies, and which are in parts of the world that reflect today’s security preoccupations.

Others see it differently. America’s ambassador to the alliance, Ivo Daalder, believes that there is little support within the organisation for NATO “narrowing its ambition”. He also says that there is no “either or” between America’s commitment to NATO and its search for other partners round the world. Mr Daalder adds: “This administration believes in strengthening alliances and partnerships—including NATO. You don’t tackle things like Iran, climate change, proliferation, BMD or cyber-threats on your own.”

In the 20 years since the end of the cold war NATO’s obituary has been written many times, so far always prematurely. In a world of fewer dragons but a great many more snakes, it can look clumsy. Yet it carries on, attempting, as next week, to reinvent itself a little every decade or so. NATO has more members than ever and other countries wish to join it. Even the most critical Americans admit they would miss it if it was not there. And whatever its failings, most of NATO’s members still see it as the cornerstone of their security and the irreplaceable bond that joins America to Europe. After 61 years, the alliance shows signs of wear and tear, but it endures.  (photo: Reuters)