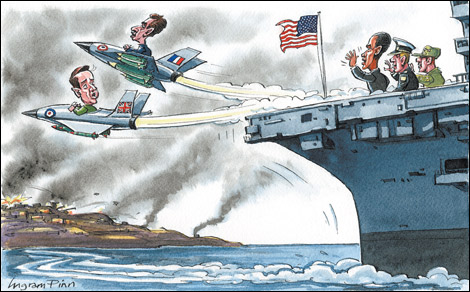 From Roger Cohen, the New York Times:  The Libyan operation has been a strategic shock to Europe — and here we get to the careful-what-you-wish-for side of un-slavishness. You can’t pretend to strut your stuff as Europe and at the same time slash defense budgets to the point that, a couple of months into a military operation, you find yourself running out of jet fuel and munitions.

Libya has underscored the unique U.S. capacity to project power and the heavy European dependence on that projection. I don’t see a European public ready to bolster defense spending, but the need is there. Un-slavishness means little if it does not mean assumption of responsibility.

NATO, having gone in, has to prevail in Libya. Prevailing means Qaddafi’s departure in short order. Stalemate is a Qaddafi victory. His bet is that he can hang on longer than NATO can remain united.

The longer stalemate goes on, the more Libya fractures and the higher the risk that Libya will distort the Western approach to an Arab transformation whose bumper sticker should be, “It’s Egypt, stupid.”

Only if the Arab world’s largest state, cultural heart and political reference can achieve a stable transition to representative government will the Arab Spring move forward. Libya cannot be the tail that wags the Egyptian dog.

So the immediate test of the redefined U.S.-British relationship is the ability of Obama and Cameron to deliver change in Tripoli fast and stop the conflict festering. I think it’s doable. But the condition is no more wavering.  (graphic: Ingram Pinn/Financial Times)