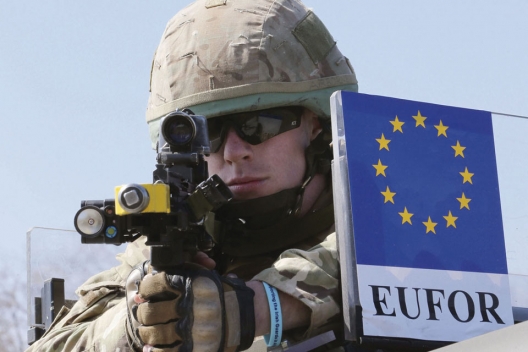 Are European Union member states about to launch a serious effort to create a “European army?” EU Commission President Jean-Claude Juncker, reacting to Russia’s military intervention in Ukraine, famously broached the idea in March 2015. “With its own army,” he declared, “Europe could react more credibly to the threat to peace in a member state or in a neighboring state.” Juncker got a tepid response at the time. One UK official curtly observed that defense is a national, not an EU responsibility, and there is no prospect of that position changing.

But talk of a European army—in theory, this could involve multinational European formations led by an integrated military chain of command and under the political control of a unitary EU executive authority–seems fashionable once again. The subject might be raised at this Friday’s informal summit of EU heads of state and government (minus the British) in Bratislava. In recent weeks, Hungarian Prime Minister Viktor Orban has declared that the EU should “start setting up a joint European army.” His Czech counterpart, Bohuslav Sobotka, has favored “considering its creation.”  And German Defense Minister Ursula von der Leyen, who last year endorsed a European army as a “long-term goal,” now advocates a “European defense union, which is basically a Schengen of defense.”  Such rhetoric, albeit imprecise, seems at first glance to be at odds with developments this summer.

The “Brexit” vote in the United Kingdom means the EU stands to lose, by 2019, one of its most capable military powers. (France is the other.) True, UK enthusiasm for the EU’s Common Security and Defense Policy gradually had waned since the project’s formal launch in 1999. For example, London’s firm opposition to a stand-alone EU operational headquarters doomed that French-led initiative.

But it also has been politically expedient for others to blame the British for the spotty results of CSDP, as Italy’s former chief of defense, retired General Vincenzo Camporini, confided in an interview last month. In any event, loose talk about a European army hardly is an inducement to Her Majesty’s Government to cooperate pragmatically with the EU on security and defense in a post-Brexit environment.

Moreover, the 28 NATO Allies agreed at their Warsaw Summit on significant measures to bolster their collective deterrence and defense posture within the transatlantic alliance in response to new threats from the “east” and “south.” But the Summit deliberations also confirmed that Allies do not necessarily share the same strategic priorities, willingness to put their soldiers in harm’s way, or determination to adequately fund defense investments.

Frankly, it is hard for proponents of a European army to explain why the 22 Allies who are also EU members insist so strongly on their sovereign prerogatives at NATO, where decision-making is governed by a “consensus rule,” if they are presumed willing to cede their sovereignty in the most sensitive of domains—namely, the structure and capabilities of their national defense and command and control of their armed forces—within an EU-run framework. Nor do its proponents explain how a European army without nuclear weapons would credibly deter a nuclear-armed aggressor. There is no sign that France is about to put its independent nuclear forces on offer to the EU.

Other vexing issues would have to be addressed, as well. Would the U.S. commitment to defend Europe, enshrined in the Washington Treaty since 1949, remain solid? Perhaps, but this would depend, for example, on the operational capabilities of the new army, and Europe’s willingness to use it for crisis response operations outside the Old Continent as well as deterrence or, if necessary, defense against aggression aimed at EU member states or the non-EU Allies, including the United States.

Would national governments depend on a European army to provide military backup for their internal security forces in the event of a terrorist attack or natural disaster? Paris, Brussels, Berlin, Italy, and Spain might have different opinions here.

And those who think a European army would save money likely would be disappointed. Defense costs reflect many factors, including diverse (but legitimate) military requirements, budget cycles, industrial and technological interests, and bilateral and multilateral arrangements. A European army would not be a panacea for current capability shortfalls. Indeed, a new supranational acquisition authority could mean EU states pay more for less capable kit.

To her credit, EU High Representative Federica Mogherini recently threw cold water on the European army idea, telling reporters after an informal EU foreign ministers meeting that “all agree…that (it) is not something that is going to happen any time soon.” Hence, when she unveils, at the Bratislava meeting, her “roadmap” to implement the global strategy document submitted to EU leaders in June, Mogherini is expected to focus on a more pragmatic agenda.

This could include, for example: a redefinition (read: lowering) of the EU’s “level of ambition” for military crisis response operations which, under the 1999 “Helsinki Headline Goal,” envisioned that the EU would be able to deploy, by 2003, up to 50,000-60,000 soldiers within 60 days and maintain them on operations for at least one year; new mechanisms for the development, acquisition, pooling, and sharing of military and civilian crisis response and stabilization capabilities; and new proposals for the use of the EU rapid-reaction “battle groups,” which have never been deployed.

Hopefully, Mogherini also will include detailed proposals for the enhanced cooperation between NATO and the EU promised by NATO Secretary General Jens Stoltenberg, EU Council President Donald Tusk, and Juncker in their joint statement at the Warsaw Summit. That statement cited seven specific areas of new or intensified cooperation relevant to common security challenges from the “east” (such as “hybrid” threats and cyber intrusions) and the “south” (such as migration, terrorism, and security capacity-building).

As members of the EU, close partners of NATO, and nations that take increasingly seriously the need for a comprehensive approach to defense and security, Sweden and Finland should be major contributors and catalysts to cooperation between these equally vital organizations. This effort would yield far better results than resurrecting the shopworn, quasi-theological debates over defending EU or NATO “autonomy” or the myth that Europe’s security and defense dilemmas would be solved by a European army.