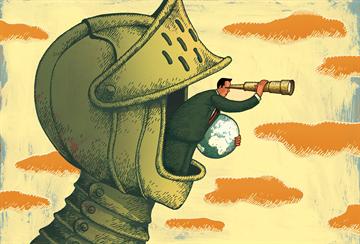 From Richard Weitz, Project Syndicate :  NATO is, in a way, going global, as it forges partnerships with countries as distant as Japan and Australia to engage in security activities in places as remote as Central Asia, Africa, and the Arctic. These new partnerships benefit both sides: partners make concrete, valuable contributions to the Alliance’s success, while NATO improves their security.

Despite some setbacks, NATO’s extra-regional campaigns can serve as convincing evidence that the Alliance is the only multinational security institution capable of conducting sustained, high-intensity combat operations worldwide. In Libya and the Gulf of Aden, the Alliance pooled members’ military assets and contributions from other partners. The participation of troops from Australia, South Korea, Qatar, the United Arab Emirates, and Morocco, among others, and the leading role of the United Nations and the Arab League in legitimizing these campaigns, demonstrated NATO’s emerging role as the hub of a global network of partnerships. . . .

Moreover, this “global NATO” has raised concerns among great powers. While NATO may count India or Brazil among its future partners, China and Russia remain concerned that the Alliance might pursue a global containment strategy against them, or seek to displace the UN as the leading global security institution.

NATO leaders responded to some of these concerns at the Chicago summit. They gave assurances that, while NATO has adopted a global approach to security, its main activities outside Europe and Afghanistan will primarily comprise dialogue with partners or, in special cases, joint defensive measures with other security institutions under a UN mandate, such as in the Gulf of Aden. NATO has explicitly acknowledged the UN’s unique role in global security and stresses its aim to collaborate with, not displace, it.

NATO cooperation with external partners might extend to issues such as managing climate change and promoting security in the Arctic and in cyberspace. The Alliance could also offer to new partners some of the tools for security-sector reform that it has applied in former Soviet countries and, more recently, in the Middle East, aimed at ensuring that regional militaries respect human rights and civilian authority.

But NATO countries have only just begun to consider which policies to pursue in tackling global challenges, which capabilities are needed to achieve their security goals, and how to collaborate with non-Western institutions and countries. Any government that hopes to benefit from NATO’s new global role, or is concerned about its implications, should be involved in shaping this process.

Richard Weitz is Senior Fellow and Director of the Center for Political-Military Analysis at the Hudson Institute.  (graphic: Paul Lachine/NewsArt)