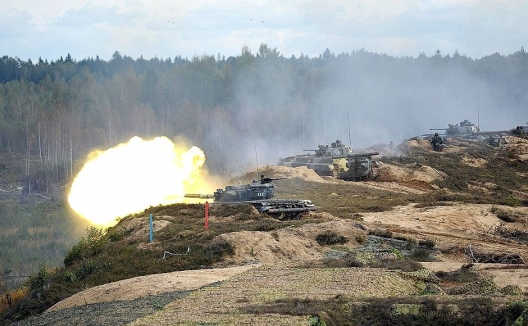 Military exercises are a critical means of testing, refining and demonstrating readiness for combat operations. In February 2015, we published a chart comparing the magnitudes of military exercises conducted by NATO and Russia.

The contrast was jarring, with Russian exercises dwarfing those of NATO. The updated chart below captures much of that data and indicates that since then, the NATO-Russia Exercise Gap, though reduced, remains strategically significant.

Then…….
In 2013 and 2014, Russia frequently executed large scale exercises. These included at least six drills involving between 65,000 and 155,000 personnel – four of them over 100,000 personnel each. In contrast, the largest exercise conducted by NATO or allied forces during that timeframe brought 16,000 to the field.

Russia’s military conducted numerous no-notice “snap” exercises, sometimes involving 50,000 personnel. Some “snap” drills were personally ordered by Russian President Vladimir Putin. They test a military’s ability to mobilize and deploy with immediacy. They are an important means by which Moscow attempts to intimidate it neighbors.

…and Now
In response to Russia’s invasion of Ukraine and other provocations, NATO promulgated its Readiness Action Plan (RAP) during the Alliance’s September 2014 summit meeting in Wales, United Kingdom. A key element of the RAP is a more robust exercise regime to reinforce NATO’s deterrence end defense posture.

The updated chart below captures exercises involving 5,000 or more personnel. It indicates that over the last two years, the exercise gap has narrowed, but it still remains a poor reflection of NATO’s readiness and determination in contrast to that of its eastern adversary.

Over that period, Russia conducted only two massive exercises. CENTR-15 in September 2015 involved 95,000 personnel. Russia’s chief of the General staff boasted that last September’s KAVKAZ-16 involved some 120,000 personnel – though some analysts assert this total camouflages an amalgamation of separate exercises.

Among others, Russia conducted four exercises involving between 25,000 and 38,000 personnel.

The exercise gap was reduced in part by the increased size and frequency of NATO exercises but the main driver was the reduced frequency of Russia’s massive exercises. The reasons for the latter could include the competing personnel, equipment, logistical and financial demands generated by Moscow’s military operations in Ukraine, Syria and elsewhere. Indeed, a senior Russian official told the Financial Times last year that “the cost of the Syria operation was expected to be covered by reducing the number and scale of domestic military exercises.”

The largest exercise planned by NATO Allies in 2017 will be the US-led SABER GUARDIAN planned for the spring of 2017 in Romania and Bulgaria. It will combine with other exercises planned in the Black Sea region, including with Ukraine and Georgia, to have a total weight approaching 30,000 personnel.

Addressing the NATO-Russia exercise gap will become more urgent now that the Alliance decided to deploy a combat battalion in each of the Baltic states and Poland to deter and defend against potential Russian aggression.
These small, forward-deployed units will be the core of NATO’s Enhanced Forward Presence. They will be positioned against the exponentially larger, heavily armed units of Russia’s Western District, and Moscow has announced plans to add or upgrade three divisions of that region. EFP’s deterrent value will be a function of the combat capability of its battalions and the Alliance’s ability to rapidly reinforce the Baltic region in crisis and conflict. And the latter will only be credible if it is tested and demonstrated regularly through robust exercises proximate to the line of confrontation.

NATO’s Enhanced Forward Presence and its four battalions of some 4,000 personnel intend be fully operational in the spring 2017. Russia recently announced plans to conduct the next iteration of its ZAPAD [WEST] exercises in 2017. As our chart indicates, ZAPAD 2013 brought over 90,000 Russian troops to the field. Next year’s iteration of ZAPAD can be expected to take place in the summer, be just as large, and have NATO’s EFP in its crosshairs.

[Editor’s note: this graphic has been updated to reflect current exercise data as of November 2020]

Ian Brzezinski is a resident senior fellow with the Brent Scowcroft Center on International Security and a former deputy assistant secretary of defense for Europe and NATO policy. Nicholas Varangis is the Associate Editor of the Warfare History Network website and a researcher on global security issues.