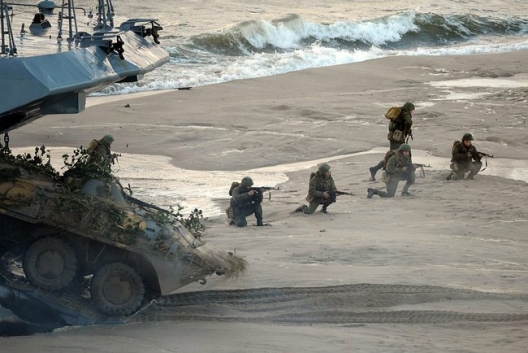 Exercises are used by defense establishments to test their readiness, deployability, and logistical and combat proficiency. They can be used as demonstrations of force to underscore determination to defend national territory/interests and those of allies and partners. They can also be used to intimidate and to camouflage offensive operations. Regarding the latter, in February 2014 Russia mobilized 150,000 troops under the guise of an anti-terror simulation. Many of the units in this exercise were deployed along Ukraine’s border just as Russia invaded Crimea and then later eastern Ukraine.

While military exercises are not the sole indicator of military readiness and capability, they do reflect seriousness of intent. In this case, a comparison of exercises by NATO and those of Russia reveals a troubling disparity in magnitude. In short, there is a NATO-Russia “exercise gap” that is all the more glaring when one would think it would be easier for a group of nations to orchestrate larger exercises than those conducted by a single nation.

The following chart indicates that since 2013, Russia has conducted at least six military exercises involving 65,000 to 160,000 or more personnel. In contrast, during the same period, NATO’s most significant exercises included STEADFAST JAZZ, a collective defense exercise conducted in Poland and Latvia in November of 2013 involving 6,000 personnel (of which half were headquarters staff) and NOBLE LEDGER, a test of the NATO Response Force (NRF) that brought 6,500 troops to the field. Individual NATO allies have hosted larger multinational exercises in the North Atlantic Area. These include Norway’s COLD RESPONSE involving some 16,000 troops, the United States’ BOLD ALLIGATOR involving 15,000 personnel and Poland’s October 2014 ANAKONDA with 13,250 personnel.

NATO leaders agreed at their September 2014 summit in Wales to step-up the Alliance’s exercise regime. Later this year, NATO will conduct TRIDENT JUNCTURE in Spain, Portugal, and Italy with 25,000 troops. Norway has offered to host an exercise of similar magnitude in 2018. While these are useful events, shouldn’t such exercises be held in Poland, the Baltic States or Romania which are more proximate to Russia and are more directly threatened by Moscow’s invasion of Ukraine? Moreover, these planned exercises are still dwarfed by the likes of Russia’s ZAPAD 2013, an exercise conducted on its western frontier that brought to the field some 90,000 troops. (ZAPAD 2009 infamously concluded with a simulated nuclear attack on Poland.)

Another troubling dimension has been Putin’s use of spot exercises to keep his forces sharp and to intimidate his neighbors. For example, on December 5, 2014, Moscow launched, without any notice to NATO allies, a “spot” exercise in Kaliningrad, Russia’s Baltic enclave tucked in between Poland and Lithuania. According to the Russian General Staff, the exercise involved 55 ships, 9,000 servicemen, 250 tanks and armored personnel carriers, over 100 artillery units, combat air support, and the deployment of Russia’s new Iskander (SS-26) medium range ballistic missile system.

By demonstrating an ability to mobilize so quickly in Kaliningrad, Moscow further validated Central European concerns over the potential for Russia to launch a sudden strike for limited territorial gain. Such a swift attack could establish a fait accompli before NATO decision-makers convened to agree on what had transpired and how to respond.

The Kaliningrad show of force also the raises the question: When was the last time NATO commanders conducted a spot exercise of such magnitude?

The speed in which Russia mobilizes its military exercises may be even more troubling than their size. In order to restore deterrence in Europe, NATO must balance both.

Ian Brzezinski is a resident senior fellow with the Brent Scowcroft Center on International Security and a former deputy assistant secretary of defense for Europe and NATO policy. Nicholas Varangis is part of the Scowcroft Center’s Transatlantic Security Initiative.