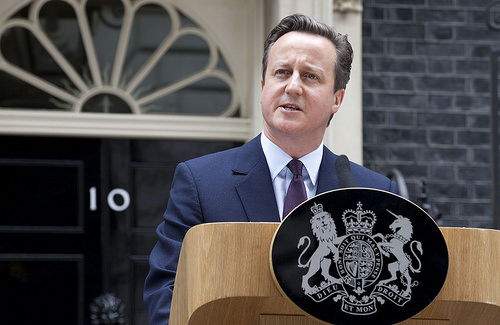 [T]his document sets out our National Security Strategy for the coming five years, and how we will implement it. It presents a clear vision for a secure and prosperous United Kingdom, with global reach and global influence….

Russian behaviour
3 .19  At the NATO summit in Lisbon in 2010, we committed to work with our Allies to build a partnership with Russia. But since then Russia has become more aggressive, authoritarian and nationalist, increasingly defining itself in opposition to the West. The illegal annexation of Crimea in 2014 and continuing support to separatists in eastern Ukraine through the use of deniable, hybrid tactics and media manipulation have shown Russia’s willingness to undermine wider international standards of cooperation in order to secure its perceived interests.

3.20  Russia is mid-way through a programme of major investment to modernise and upgrade its military, including its nuclear forces. It has also increased its nuclear exercises and rhetoric, with threats to base nuclear forces in Kaliningrad and Crimea. Its military activity around the territory of our Allies, and close to UK airspace and territorial waters, is designed to test our responses. Russia’s behaviour will continue to be hard to predict, and, though highly unlikely, we cannot rule out the possibility that it may feel tempted to act aggressively against NATO Allies.

3.21  Our commitment to collective defence and security through NATO remains as strong as ever. The 2014 Wales Summit, under UK leadership, delivered an effective and united response to Russian behaviour. NATO’s commitments include the Allies’ defence investment pledge and the Readiness Action Plan, which respond to the challenges posed by Russia and their strategic implications, as well as to risks and threats to the south of Europe. With NATOAllies we have made the Very High Readiness Joint Task Force a reality and our contributions to the NATO Air Policing Mission in the Baltics will remain important to deter threats. At UK urging, the EU has imposed sanctions designed to change Russian behaviour….

Deterrence
4 .12  The collective defence and cooperative security provided by our membership of NATO further enhances the credibility of our deterrence. We will also work with our key allies across the world to multiply the effects of our own determined approach and increase our collective security. In NATO, we will lead a renewed focus on deterrence to address current and future threats, and to ensure that our potential adversaries are in no doubt about the rangeof responses they should expect to any aggressive action on their part.

Our sovereignty
4 .13  We will use all of our capabilities to defend our sovereignty and territorial integrity, and our Armed Forces are ready to use force when required. We are also protected through our membership of NATO. Article 5 of the North Atlantic Treaty states that an armed attack against one state shall be considered an attack on all.

4 .14  There is currently no immediate direct military threat to the UK mainland. But, with increasing frequency, our responses are tested by aircraft, including Russian aircraft, near our airspace, and maritime activity near our territorial waters. The Royal Air Force protects our airspace and is ready at all times to intercept rogue aircraft. The Royal Navy protects our waters, and deters terrorist and criminal activity. Our NATO Allies provide us with early warning of approaching ships and aircraft, or deal with them before they reach our territory or airspace, as we do for our Allies. Our investment in Maritime Patrol Aircraft will significantly improve our ability to maintain our maritime security….

4 .16  The UK has been under constant threat from ballistic missiles since the Second World War. But states outside the Euro-Atlantic area and non-state actors are now acquiring ballistic missile technology. The threat faced by the UK, our Overseas Territories and our military bases has evolved. We will continue to commit significant funds to the NATO Ballistic Missile Defence (BMD) network, as well as supporting research and development initiatives and multinational engagement through the UK’s Missile Defence Centre. We will invest in a ground-based BMD radar, which will enhance the coverage and effectiveness of the NATO BMD system. We will also investigate further the potential of the Type 45 Destroyers to operate in a BMD role….

Our Armed Forces
4.33  Since 2010, we have restored our economic security and balanced the defence budget. We will continue to meet the NATO target to invest 2% of GDP on defence, which will allow us to:

• Increase the defence budget in real terms every year of this Parliament.
• Deliver our commitment to maintain the size of the regular Armed Forces and to not reduce the Army to below 82,000, and increase the Royal Navy and Royal Air Force by a total of 700 personnel.
• Deliver our commitment to increase the equipment budget by at least 1% in real terms and continue to meet the NATO target to spend 20% of the defence budget on researching, developing and procuring new equipment.
• Establish a new Joint Security Fund, from which the Ministry of Defence (MOD) will draw….

Working with NATO, the US and France
4.70  Nuclear deterrence is an important part of NATO’s overall strategy. Since 1962, the UK has declared our nuclear capability to the defence of the Alliance, thereby contributing to the ultimate guarantee of collective Euro-Atlantic security.

4.71  The UK works closely with the US and France on nuclear matters, including nuclear policy. UK and US nuclear defence cooperation is underpinned by the recently renewed 1958 Mutual Defence Agreement and the 1963 Polaris Sales Agreement. Among other things, these allow the UK to reduce costs by procuring Trident missiles and other components from the US while maintaining full operational independence. We collaborate with France under the 2010 Teutates Treaty to develop the technologies associated with the safe and effective maintenance of our respective nuclear stockpiles….

Defence engagement
5 .12  We are making our defence policy and plans international by design. Our Armed Forces have always operated internationally, deterring major threats, responding to crises and conflicts, and exercising and building defence capabilities together with our allies and partners. We will place more emphasis on being able to operate alongside our allies, including in the UK-France Combined Joint Expeditionary Force, the UK-led Joint Expeditionary Force, and NATO’s Very High Readiness Joint Task Force which the UK will lead in 2017….

The Euro-Atlantic area
5.23  The security and stability of the UK has long depended on our strong partnerships in the Euro-Atlantic area, including NATO. We will deepen our security, intelligence and defence relationships in particular with the US, France and Germany.

North Atlantic Treaty Organization
5.24  NATO is the strongest and most effective military alliance in the world. It has formed the bedrock of our national defence, and of stability in the Euro-Atlantic area, for almost 70 years. Our collective Article 5 commitment, that an armed attack against one state shall be considered an attack on all, underpins the security of the UK and our Allies.

5.25  In September 2014, we hosted the NATO summit in Wales at a point of strategic importance for the Alliance. We set in motion the most significant strengthening of collective defence in a decade, as well as new initiatives to tackle modern security threats. The summit included an unprecedented commitment by 28 Heads of State and Government to halt the decline in defence expenditure. We also hosted over 60 partner countries and launched new joint initiatives to help prevent conflict, build security and enable other countries to draw on NATO’s extensive expertise and experience.

5.26  NATO is at the heart of the UK’s defence policy. The decisions taken in this National Security Strategy and Strategic Defence and Security Review are informed by NATO’s political guidance. The choices we have made to invest in our Special Forces, cyber, Maritime Patrol Aircraft, Intelligence, Surveillance and Reconnaissance aircraft and BMD show our commitment to meeting NATO’s highest priority requirements.

5.27  Our defence spending commitment will ensure that we remain NATO’s strongest military power in Europe. In 2017 the UK will lead the Very High Readiness Joint Task Force, formed in response to Russia’s actions in Ukraine, and we will make a significant contribution to the force every year of this Parliament. As well as providing Typhoons to NATO’s Baltic Air Policing mission, we have provided ships and Army units to NATO exercises to reassure our Allies against the threat from Russia, and we will continue to do so. We are joining the German-US Trans-Atlantic Capability Enhancement and Training initiative in the Baltic states and Poland, sharing our military expertise.

5.28  We are working with Poland to ensure that the Warsaw Summit in 2016 further strengthens NATO against current threats and adapts it to combat future ones. We will focus on cyber, countering hybrid threats, deterrence including strategic communications, and agile structures and decision-making. We will strongly encourage all our Allies to deliver on their Wales defence investment pledge, and support stronger, more coherent and interoperable NATO partnerships. We will continue to support a robust Alliance response, including in solidarity with Turkey, to threats from any direction….

7.17  We will establish new policy-making and delivery Joint Units in 2016:

• A Euro-Atlantic Security Policy Unit, hosted by the FCO, which will bring together diplomatic and defence expertise to develop and implement UK policy for NATO and for EU Common Security and Defence Policy; provide strategic direction to our Brussels delegations; and provide national representation to NATO and relevant EU committees.