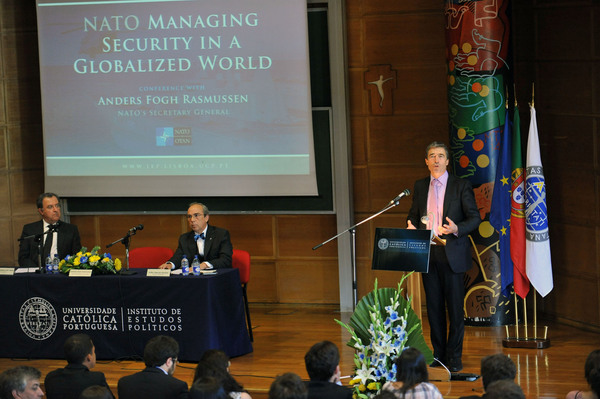 From Anders Fogh Rasmussen, NATO:  The Second World War finally brought home what the First World War should already have taught us:  the security of Europe and North America is indivisible.  Instability and insecurity on one side of the Atlantic will inevitably affect the other side of the “big pond”.

This historical lesson is the reason why visionary politicians from both sides of the Atlantic created NATO in 1949.  From now on, North America and Europe would organize their security together.  …

The terrorist attacks of September 11, 2001 ushered us into a new era.  Terrorists from the Middle East and the Gulf region were directed from Afghanistan, plotted in Germany, took flight lessons in the US, and finally hijacked civilian airliners to turn them into weapons of mass destruction.  Nothing could illustrate more forcefully – and tragically – the dark side of globalisation.  The terrorists of “9/11” had successfully exploited the opportunities of a globalised world in support of their aims.  And as a result, we are living in a new era of globalised insecurity.

“9/11” was a challenge not just to the United States.  It was a declaration of war against the entire transatlantic community.  We all understood this.  And we acted accordingly.  Only a few hours after the attacks, NATO invoked Article 5 of its founding charter.  For the first time in the history of this Alliance, the Allies invoked the Treaty clause that says that an attack on one is an attack against all.

But we did not leave it at that.  We immediately understood that no borders, and no oceans, could shield us from these kinds of threats.  If we wanted to be secure, we had to take action.  To go to Afghanistan, the source of the attacks.  To defeat those who masterminded them.  And to create conditions that would prevent future attacks.  In a nutshell, we had to prevent Afghanistan from being a safe haven for the world’s most dangerous terrorists – ever again. …

We have the right strategy:  We are changing the political conditions in the key strategic areas of Afghanistan; we are marginalising and isolating the most extreme elements of the insurgency; we are protecting the population; and we are strengthening the authority, and the capability, of the elected government.  Most importantly, we are training the Afghan army and police, so that Afghanistan will be able to look after its own security.

We also have the right forces:  Over 120,000 troops are now serving under NATO command in Afghanistan – and more are arriving.  Portugal has contributed soldiers, including a quick reaction force, and training teams.  And more and more nations from all over the world are joining the mission – 46 countries from all over the world are now participating in ISAF.  If “9/11” was the dark side of globalisation, ISAF’s international makeup is the bright side of it.  Rarely have so many countries worked together towards a common goal.

So things are moving, and in the right direction.  This is not the time to waver.  It is not the time to give the Taliban the false idea that we can be driven out or waited out.  It is the time to send a clear signal – that we will stay as long as it takes to finish the job.

Excerpts from speech by Secretary General of NATO Anders Fogh Rasmussen at the Catholic University of Lisbon, Portugal.  (photo: NATO)