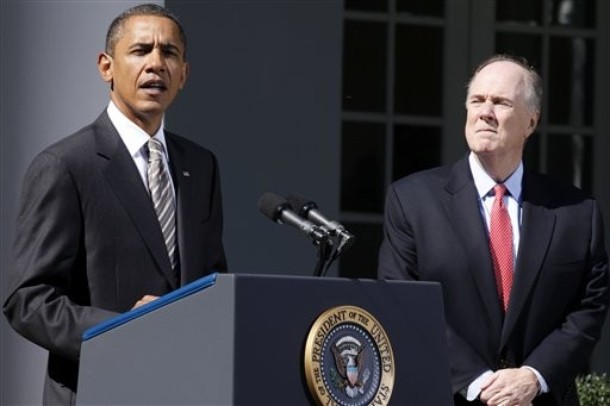 From the Editors of the Washington Post:  Two weeks ago, when Mr. Obama flatly decreed the end of the Gaddafi era – "So let me just be very unambiguous about this," Mr. Obama said then. "Colonel Gaddafi needs to step down from power and leave" – momentum did seem to be on the side of the rebellion. A modest intervention from supporting countries, such as imposition of a no-fly zone, might have tipped the balance, convincing pilots and higher-ranking officers around Mr. Gaddafi that the future resided elsewhere.

The United States chose not to intervene in that way. It joined with allies in imposing sanctions on Mr. Gaddafi and threatening to bring him before the International Criminal Court. But when it came to a no-fly zone, providing arms to the opposition or other tangible measures, the administration demurred, insisting that the United Nations, NATO and other international groups take the lead. Mr. Obama’s national security adviser, Thomas Donilon, last week said that the United States would insist on backing not only from those traditional allies but from the African Union and the Arab League, too – "not just rhetorical support but actual participation. …"

On the other hand, Mr. Gaddafi’s military is weak, and many Libyans clearly are desperate for change. And a Gaddafi victory also carries risks for U.S. interests, as Mr. Obama himself has said. A sacking of Benghazi will be accompanied and followed by a horrific bloodbath. A revitalized dictator is likely to be distinctly unfriendly to Western interests. And other despots will conclude that Mr. Gaddafi’s brand of merciless revenge brings better results than the Tunisian and Egyptian models of accommodating people’s yearning for freedom – and that American threats to the contrary can be discounted.  (photo: AP)