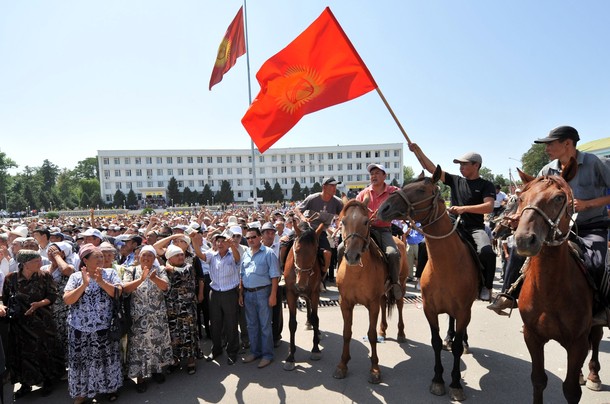 From Andrew Higgins, the Washington Post:  Beset by mounting casualties on the battlefield and deepening disquiet at home over America’s longest war, President Obama’s Afghan policy now faces another big headache: the unraveling of central authority in Kyrgyzstan , a Central Asian nation that hosts an American air base critical to the battle against the Taliban.

Just a month after agreeing to extend for a year a $60 million lease on a U.S. Air Force base here, Kyrgyzstan’s generally pro-Western but increasingly impotent president, Roza Otunbayeva, has retreated from U.S.-backed security programs that Washington hoped would help fortify a fragile Kyrgyz government. These include a counter-terrorism and anti-narcotics training center and an international police mission.

The government’s paralysis, most notable in its inability to control truculent Kyrgyz nationalists in the south of this former Soviet republic, does not pose any immediate physical threat to the U.S. Air Force base, which is about 20 miles from Bishkek in the north. But it does raise the prospect of prolonged and possibly bloody clashes ahead and strengthens forces inimical to Washington’s interests in the region. …

In a severe and humiliating blow to the president’s authority, the mayor of Osh, a rabble-rousing Kyrgyz nationalist hostile to what he sees as foreign interference, last week defied an order that he give up his post. "I am going nowhere," the mayor, Melis Myrzakmatov – who was appointed by Otunbayeva’s ousted predecessor – told supporters at a late-August rally. A minister from Bishkek sent to calm the crowd was roughed up and fled the city.

"The president has lost face and also power," said one Western official. "This is a catastrophe." Otunbayeva had earlier in the week contacted the European Union’s senior diplomat for Central Asia and others to tell them that the mayor would be gone within hours, said people familiar with the conversations. The U.S. Embassy in Bishkek said it was not informed of the abortive plan to remove the mayor.  (photo: Getty)