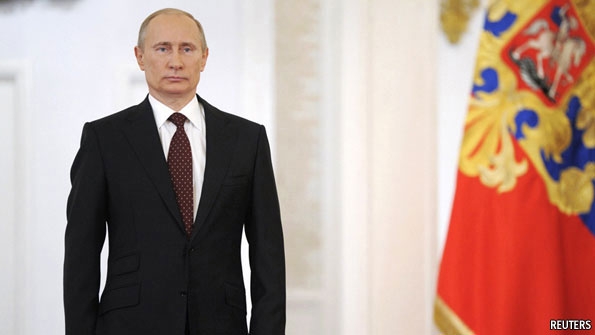 From the Economist:  On the margin of the G20 summit later this month Russia’s new (but also old) president, Vladimir Putin, will meet America’s Barack Obama for the first time since his election in March. The atmosphere is likely to be chilly. That is as it should be, for since his decision last autumn to return to the Kremlin, Mr Putin has been stridently negative and anti-Western, most recently over Syria (see article). Such behaviour demands a stiff response from the West. . . .

This should not lead to a total rupture with Russia. Constructive engagement should continue on the economic front. With the oil price falling, stronger economic ties to the West could help to create a business constituency inside Russia that sees the need for greater liberalisation to keep the economy growing. The West should certainly look at introducing reasonable visa rules for Russian businesspeople (Britain’s are absurdly tough). Other cold-war relics, such as America’s Jackson-Vanik trade restrictions, should also go. And why not dangle in front of the bauble-loving Mr Putin the prospect of Russian membership of the OECD rich-country club? Or a free-trade agreement with the European Union?

But if it is right to engage economically, it is also right to condemn Mr Putin’s illiberal autocracy. Mr Obama should bluntly criticise Russia’s poor human-rights and democratic credentials. Western ambassadors should not hesitate to talk to opposition protesters in Moscow just because the Kremlin objects.

In foreign policy, too, the West should stand firm. Russia cannot be allowed to veto America’s missile-defence plans in Europe. Nor should Mr Putin’s continued blocking of UN Security Council resolutions authorising intervention in Syria be treated as an insurmountable bar to action, any more than it was in Kosovo in 1999. G20 leaders should do their utmost to embarrass Mr Putin over his backing for Mr Assad. This week Hillary Clinton, America’s secretary of state, was admirably tough, condemning Russia’s sales of arms to Syria.  (photo: Reuters)