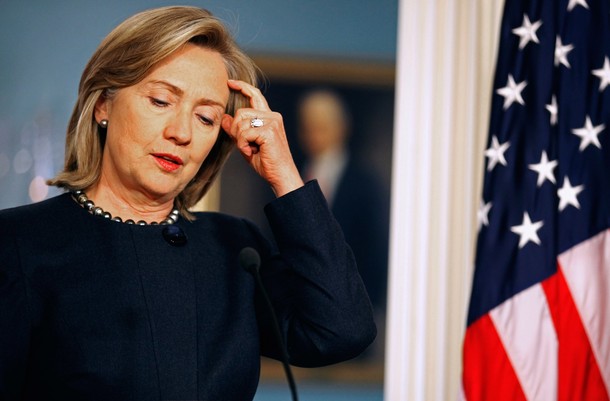 From Scott Shane and Andrew W. Lehren, the New York Times:  A cache of a quarter-million confidential American diplomatic cables, most of them from the past three years, provides an unprecedented look at backroom bargaining by embassies around the world, brutally candid views of foreign leaders and frank assessments of nuclear and terrorist threats. …

Secretary of State Hillary Rodham Clinton and American ambassadors around the world have been contacting foreign officials in recent days to alert them to the expected disclosures. A statement from the White House on Sunday said: “We condemn in the strongest terms the unauthorized disclosure of classified documents and sensitive national security information.”

“President Obama supports responsible, accountable, and open government at home and around the world, but this reckless and dangerous action runs counter to that goal,” the statement said. “By releasing stolen and classified documents, WikiLeaks has put at risk not only the cause of human rights but also the lives and work of these individuals.”

The cables, a huge sampling of the daily traffic between the State Department and some 270 embassies and consulates, amount to a secret chronicle of the United States’ relations with the world in an age of war and terrorism. Among their revelations, to be detailed in The Times in coming days:

* Bargaining to empty the Guantánamo Bay prison: When American diplomats pressed other countries to resettle detainees, they became reluctant players in a State Department version of “Let’s Make a Deal.” Slovenia was told to take a prisoner if it wanted to meet with President Obama, while the island nation of Kiribati was offered incentives worth millions of dollars to take in Chinese Muslim detainees, cables from diplomats recounted. The Americans, meanwhile, suggested that accepting more prisoners would be “a low-cost way for Belgium to attain prominence in Europe. …”

* An intriguing alliance: American diplomats in Rome reported in 2009 on what their Italian contacts described as an extraordinarily close relationship between Vladimir V. Putin, the Russian prime minister, and Silvio Berlusconi, the Italian prime minister and business magnate, including “lavish gifts,” lucrative energy contracts and a “shadowy” Russian-speaking Italian go-between. They wrote that Mr. Berlusconi “appears increasingly to be the mouthpiece of Putin” in Europe. The diplomats also noted that while Mr. Putin enjoys supremacy over all other public figures in Russia, he is undermined by an unmanageable bureaucracy that often ignores his edicts. …

* Clashes with Europe over human rights: American officials sharply warned Germany in 2007 not to enforce arrest warrants for Central Intelligence Agency officers involved in a bungled operation in which an innocent German citizen with the same name as a suspected militant was mistakenly kidnapped and held for months in Afghanistan. A senior American diplomat told a German official “that our intention was not to threaten Germany, but rather to urge that the German government weigh carefully at every step of the way the implications for relations with the U.S.” (text)  (photo: Getty)