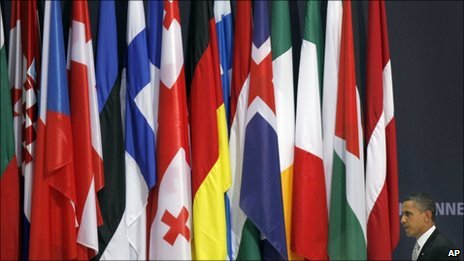 From Fyodor Lukyanov,  Russia in Global Affairs:  Apart from having competing interests, Europe and America don’t command the same influence. As the only superpower, the United States pursues a global strategy and projects its power (in all its forms) throughout the world. Europe is increasingly withdrawing into its shell and limiting its ambitions due to economic and political exigencies. In other words, Europe is primarily focused on its “near abroad,” the European periphery.

The difference in the allies’ strategic horizons affects their political thinking: the New World continues to rely on force whereas the Old World prefers “soft power.” Both are facing serious problems. America has had to realize that even the world’s leading power is not all-powerful, as its failures in Iraq and Afghanistan have shown. Europe has lost much of its appeal (the backbone of its “soft power”) as a result of the EU’s deep and protracted crisis.

The two coasts of the Atlantic are still members of one and the same political alliance. They still speak about their alliance’s importance and immutability. But despite all the high-sounding rhetoric about NATO’s bright future, there is still no clear-cut mission to draw Europe and America close together. In the Middle East, they can at least count on there being no conflict of interest (America seeks regional dominance while for Europe this region is backyard and gas station). As for the potential for greater confrontation in the Far East, Europe is not enthusiastic about it at all, whereas for the United States this is the main area of future global competition.

To sum up, the West as we’ve come to understand it no longer exists. There is Europe, America, Japan, Turkey, South Korea and others. Each country has its own interests and its own independent policies. America is interested in strategic relations, primarily in the nuclear sphere, and global security. It devotes little attention to foreign economic relations, and there are no prospects of close relations, although cooperation on specific issues is possible. Europe is involved in the economy and business. It devotes little attention to security, but the confluence of commercial interests and cultural community creates the prospect of a stronger alliance.

Fyodor Lukyanov is editor in chief of the journal Russia in Global Affairs.  (photo: AP)  (via Real Clear World)